I have been excited since day one when Gloricel messaged the invitation for me to visit her and her family in Florida. There was no schedule yet, but I figured I'd bring it up with Mayette since they too knew each other since college. We've set the date and then it got changed maybe two or three times more --- then, Mayette put her confirmation on-hold. I was conditioning myself to think it could become a solo flight after all but I didn't care. I was certain I'd go. A few days later, Mayette said she'd go, too --- so I immediately took the cue, booked the tickets, and then a few weeks after, we flew.

The hours were long but I was awake most of the time during the flight. It must've been the excitement that got me sleepless. Just a week ago, we sat down to finalize our Florida itinerary. Mayette will be celebrating her birthday within the duration of the trip and she's requested we hit the road for Key West. It was a destination Gloricel also mentioned her family would be up to going again but about a week before we left Chicago, she backed out of the Key West trip because it was impossible for her to go there and make it back to Inverness in time for her son's birthday party. The turn-down was costly and refusing a "peace offering" was pointless (happy!!!). She wouldn't take it and have made arrangements of the hotel booking herself. I was ashamed to feel indebted but at the same time awed by such generosity. I still pray for her up to this day to get the blessings she deserves for making the unnecessary gesture. It was at that moment "Gloricel" sounded synonymous with "grace" for undeserved favor. We just missed each other a lot like we feel for the rest of our pack of friends. High school through college is long enough to etch "lifetime" in friendship, I must say. It's tight. So much so, that when we are together, we feel like we've actually seen Lonna, Abel, Alfred, Fra, Wilholm, Henry, Ate Malou, Ramon, Yen, Ian, Jech, Jenny, Jekoy, Joshua, Kuya Martin, Ate Lani, Pastor Cadiz, Mama Fe, and many more friends whose names, if mentioned, will by itself be an entire article. God made it special. Each made imprints to each other's spiritual lives while we were enjoying youthful bliss and madness. --- I honestly will never make it to the Key West story if I went on and on here but I'll park the memories momentarily to give way for the rest of the Florida tale.

From the arrival area, we went straight to the Enterprise Car Rental desk to claim our SUV reservation only to find out that they ran out of it and offered us another type of car instead. The staff was selling the idea as much as he could but we adamantly cancelled and rented from AVIS instead. My company's ties with AVIS got us some discount on a Hyundai Tucson SUV. It smelled brand new as Mayette wheeled it to our inn's parking space that evening. Immediately, we slept to gain the energy needed for our 7AM trip to Key West. 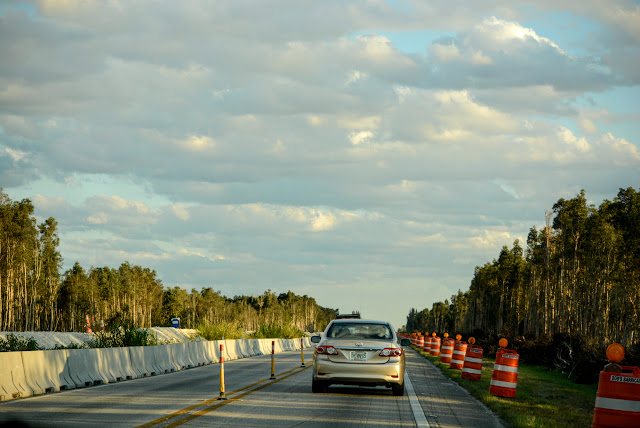 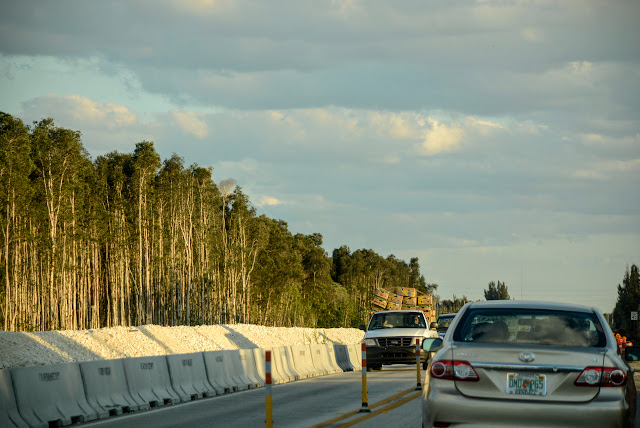 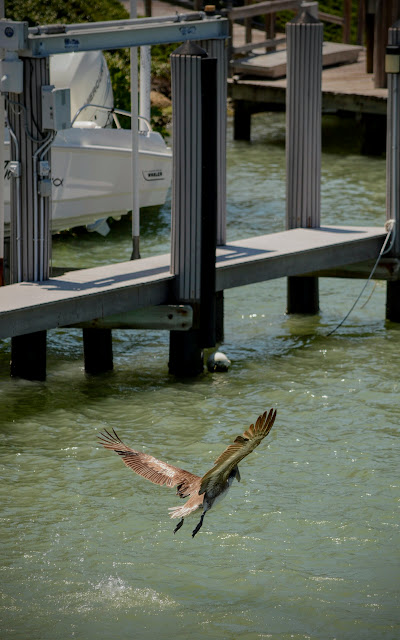 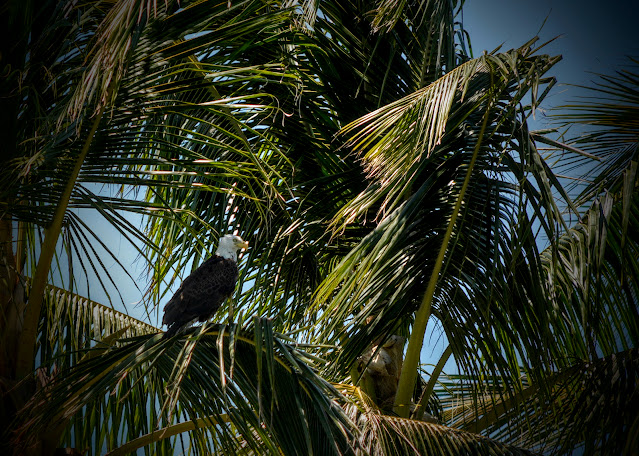 A quick breakfast, a handful of take-away cupcakes, and coffee got us started for the day. Coming from Chicago, Florida brings so much of my home country's ambiance. The heat of the sun, the palm trees lined on the street side and then some more trees remind me a lot of Philippines. The occasional sightings of Americans at street crossings became my constant reminder that I am on foreign soil. Wasting no time, we sped away via Sarasota, Fort Myers, and then Naples to try to make it to Key West by sunset. As soon as we pulled out of a McDonalds drive-thru in Naples we mused at the thought of going around a little bit longer. My manager mentioned it in one of our conversations in the office and I have been quite mystified about the place, too. We decided to make use of the opportunity while we were there. We mapped our way to Venice Court and then we wound into what looked like a cozy place full of shops that walled the lake behind it. We didn't have our lunch yet and decided we'd do it in one of the restaurants around the area. We found Riverwalk restaurant and ordered lunch while entertaining the thought of getting on the boat tour that'll take us around Naples Bay where the surrounding million-dollar mansions stood. And so we did. The tour was an hour long and they narrated the history behind each mansion, the who's who, the former and current owners. We spotted, on occasion, bald American eagles and lots of resting pelicans. On maybe two instances, the resident dolphins would show up. The last stop was near the Gulf of Mexico and then we came back. It was worth the time and a much needed break for Mayette who was driving non-stop from Tampa.

We were already hours delayed against schedule and so we continued. We drove through the Tamiami Trail which extends about 275 miles from Florida State Road 60, Tampa to US 1 Miami. 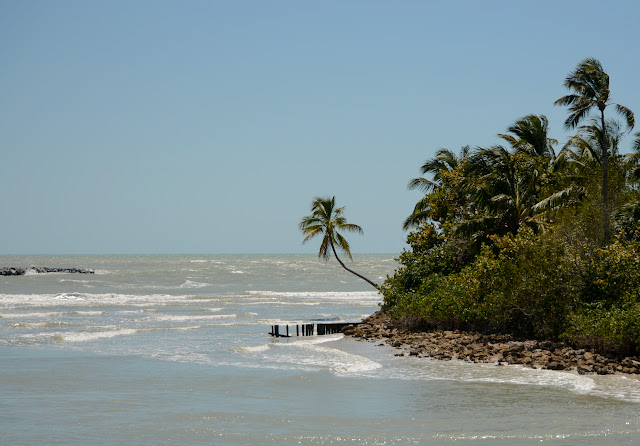 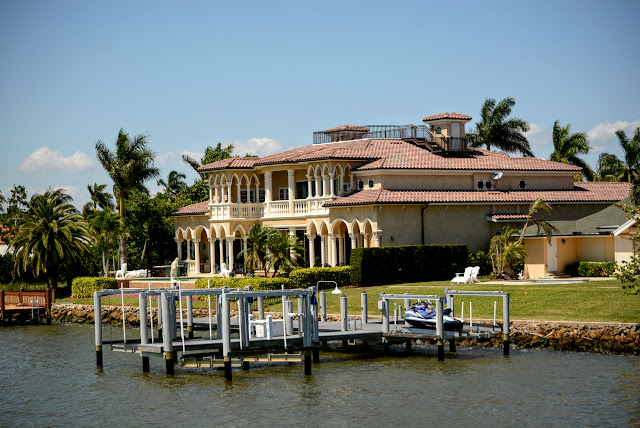 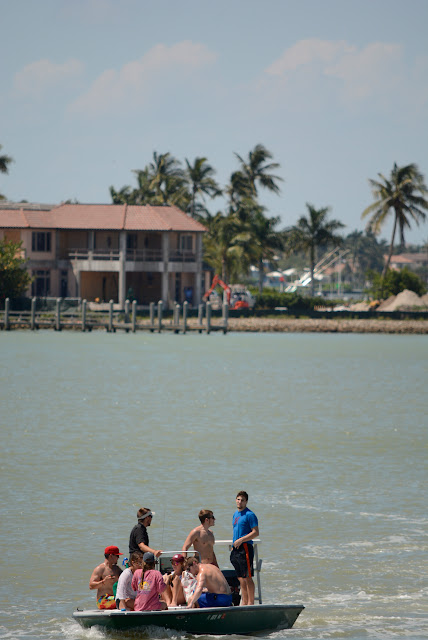 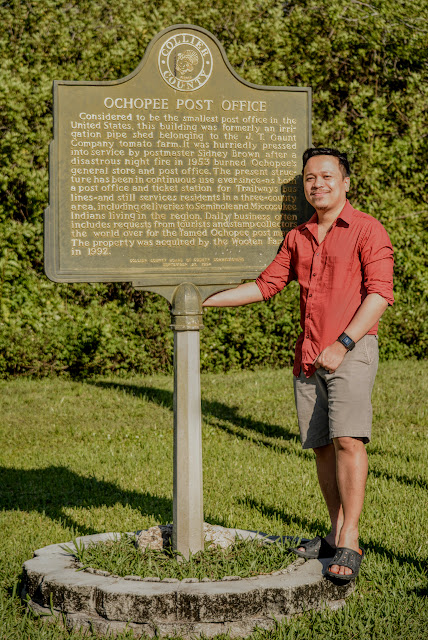 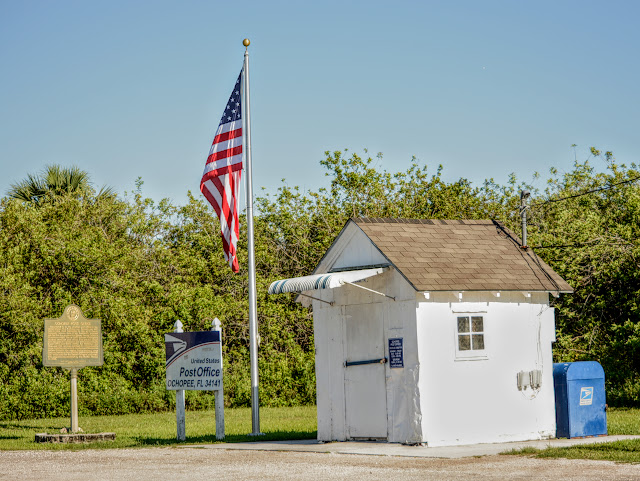 Tucked quietly at a bend in a remote place along the Tamiami highway is a tiny USPS office. It is known to be the smallest and oldest operating post office in the United States. The perks of having a car is that it can take you even to places the public buses do not reach. I regret not having a postcard to send to my family and KV. I would certainly have dropped it in the mailbox to send home. We've noticed a few others stopping by and taking pictures. 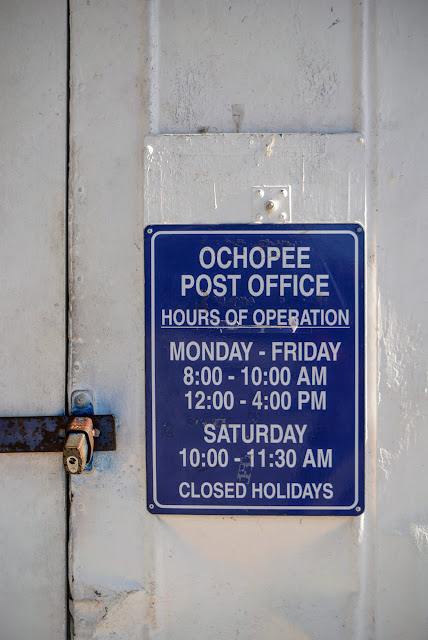 Lobbying a little longer would have been a great idea but it was getting late in the afternoon so we started moving until we had to make yet another stop. We parked in front of what looked like a shack with a mini boardwalk next to a swamp. All we know was that it was screaming "airboat" in its business sign. It turned out that the office was already closed. We inquired about their schedule of operation and took a few minutes for photo ops.

We drove again for miles. This time the sun has caught up and it sat while we passed through the 7-mile bridge to the southernmost point of Florida. We were taken one islet to another until we reached Pier House Resort and Spa. It was very late in the evening and there was no describing how uncomfortable it felt to be holding in your pee for a long time. We had to wait a little more for the front desk attendant to be available to confirm our booking. After we were handed the key, each had to run to our own restrooms to unload.


Oh what a day it's been
And what sights we've seen
Our tired bodies complain not
Even if we've been through quite a lot.
I bid the night a temporary goodbye
I know I'll see it again.
For now I'll sleep til morning light.
God -- goodnight! Amen.

The sound of crickets outside were like evening bells saying it's time to nap. Our Florida trip has just started.