Roughly six years ago, without any idea where it was, I conceded to a couple of friends' invitation to go to Malapascua. I swear I didn't know where it sat in the Philippine map then. Travel was fairly new to me way back 2009 and the mere thoughts of visiting white sand beaches and spending money to see new places were quite odd. I wasn't born in a rich family and although my dad had been to places like Japan, Camiguin, and many more (which I am learning bit by bit now), travel was really not much of a meal topic. Spending money for excursions was excruciating for us as a family, even during college. I know my dad, the good provider that he always is, found a way, somehow. Still, our college field trips didn't cost him nothing.

Today, time is a lot different than it used to. I am not saying that we are already rich but I guess graduating from college and earning a salary do have perks. We no longer have to ask our parents to fund our wants. Plus, travel is no longer far-fetched. You need not even be too rich to ride an airplane anymore. Then, when piso fare was really 1 peso (not quite right but almost) it brought me to places like Camiguin and in fact, maybe, that trip to Ilocos, too. And everybody does it, especially with the trend it has become.

The trip to Malapascua was very reminiscent of the first time I set foot on the island once labeled as "the next Boracay". It was my companions' first time and so, I secretly hid my excitement. Why rob them of a eureka moment? They deserve to see it all by themselves firsthand rather than having me paint their imagination with biased experience. I am glad my trouble remembering details and the new improvements in the island worked for that purpose.


Immediately after we disembarked, some locals approached us asking where we have booked our accommodation. Our group didn't have a fixed itinerary (although we've researched) and so, we let the organizer suggest but still ended up getting a budget room for 5 with 2 extra beds in BB's guesthouse. After settling, we took our day's breakfast in Ging-Ging's restaurant before heading out for the island tour at 12:30 PM.

An average-sized boat with outriggers waited for us at the shore. We were taken first to the sunken ship. They said it was a Japanese vessel which sank during the WWII. There is a stigma of death in shipwrecks (even in the absence of it) which is probably why the sight of the hull just seemed eerie. The water was initially clear but too much water disturbance stirred the sand especially because the tide was low when we snorkeled. The blinding murkiness added to the mystery drawing thought bubbles of "why?". It was just the first stop and other than the sunken ship, there weren't much to see. 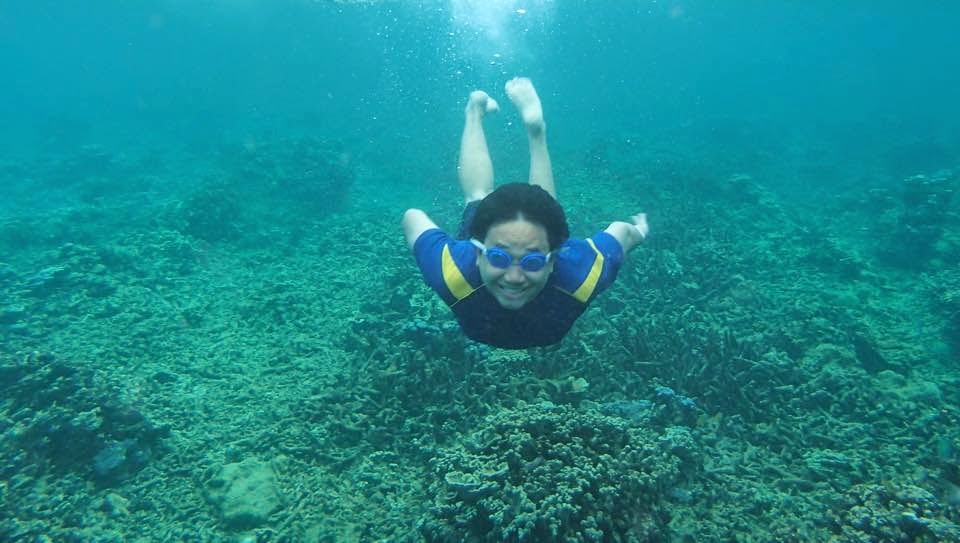 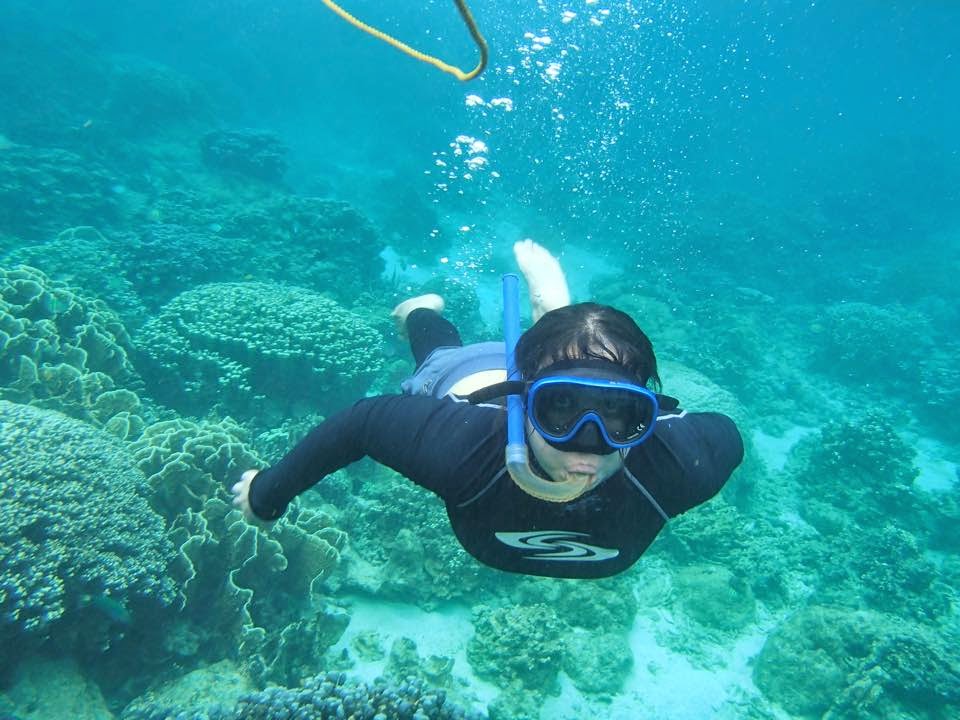 We hopped back on the boat and off we went further around the island until we reached the coral garden. We were given the disclaimer that they do not look as pretty as it was before typhoon Yolanda, but we dove in, nonetheless. They were right about the visible damage brought by the typhoon but they were wrong in thinking we will be disappointed. A few meters away from the boat, I and a friend headed forward until we reached a spot where the sun beamed generously. A little further away from where I swam, we caught sight of a span of glistening silver way ahead. We swam after it to inspect and found a school of young fishes maintaining what seemed to be a choreographed formation. The nearer we got, the more fishes emerged from the corals which would have looked like bubbles from an underwater vent at a certain distance. It was so beautiful to watch but we can't be carried away too much, lest, we be out of reach from the boat in no time. Fun makes long distance travels short. 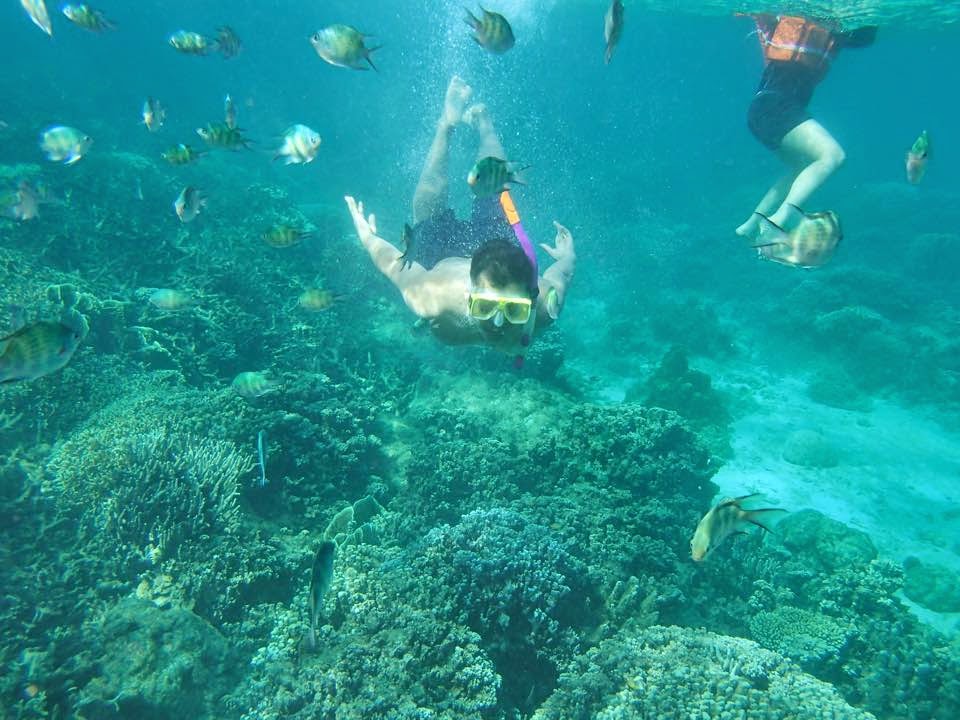 Heading back to the boat got us finding another friend feeding the fishes with bread underwater. No wonder there were various species of fish stalling and circling this lucky guy. It can't be mere charm. No, it just couldn't be. As soon as I chanced on a floating portion of bread, I held it in front of me. Soon enough the fish allegiance got divided and some were finally on me. I divided his fan base half and that got me gleaming. One by one the fishes bit until there was none. It was easy to let hours fly in this part of the tour but there were other places to go to. And so, we sailed onward.


From time to time, the skipper talked to us about how some resorts have shut down due to major infrastructure damages the strongest typhoon Yolanda (know internationally as Haiyan) wrecked on Malapascua. He recalled how the townsmen survived by taking shelter inside stronger buildings (which were by the way not too many for the entire Malapascua populace). All around the resort, the havoc is still evident but the grandeur of the island can rid you off the disappointments easily. Hope is as white as the sands on the seashore. Malapascua can recover what it lost. Give it some time. 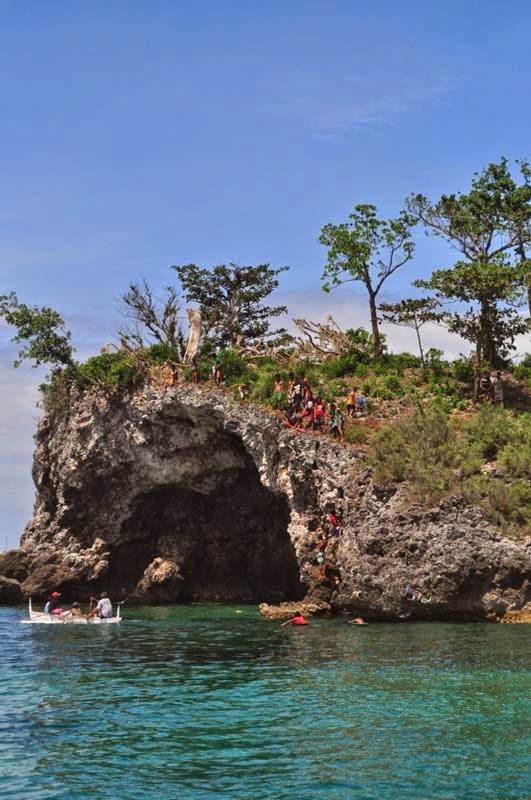 Time did pass and not too long after, we came near a cliff on an islet busy with crowds of jumpers and cliff divers. One by one the children jumped and splashed but we skipped the fun to move on to Dakit Dakit islets. The small rock islands look small at the surface but you will be surprised to know that these are actually 8-15 meter boulders which makes a perfect place for diving enthusiasts. We tried to snorkel around the area but the current was too strong. There was little chance for further exploration, therefore, we hopped back on the boat to head home.

It must have been a good 3-hour stretch of fun in the sea and interesting enough such that a few hours later, I learned that my friends have negotiated with the boatmen to take us back to the coral garden early the next day. That meant skipping the lighthouse and the discovery of other resorts and spots on the other side of the island.

Before docking, one of our companions insisted we look for fresh seafood for dinner. Like prayer answered in an instant, a fisherman standing nearby overheard and held out an enormous fish and (may I say it again!!) enormous squid. The haggling started until we all agreed to a price: P600 for a 3.5 kg of fish and P300 for a 1.75 kg of squid. My brain cells were ecstatic at the thought of cooking. I daydream about cooking all the time. When I am in a bus, in my room, at work, and wherever I travel. It is a far-fetched ambition but I hope to cook for a living someday. While everyone were busy bathing and others rested, I took a knife (and God, it felt good!). Time to butcher the fresh catch.


If there was one thing I liked about BB's guesthouse, other than it being very affordable for budget travelers, was the hosts hospitality. We had all the freedom to use their dirty kitchen, tools, and utensils. When we lacked something, they always provided a substitute we can use. That and the help of some of my friends got 5 dishes ready for our 6PM dinner. We managed to pull off fish tinola, fried fish rubbed with garlic, salt, and pepper, grilled fish and squid, and finally, squid adobo. We gorged to our heart's content and still had enough for breakfast, the next day. The meal set which would have cost P2500 in a restaurant, we ate for roughly P1000. It translated to a huge chunk of savings since the leftovers also sufficed for the next meal. I was tired and certain I'll snore loudly by bedtime but I was reluctant about calling it a night so I went out with friends for an evening swim. The sea level was too low that we ended up wading and walking on the beach, occasionally stumbling on starfishes and some strange looking sea creatures. We filled the evening silence with laughter, free and sometimes rambunctious. We ended the walk to where Amihan, Taepanee, and Maldito restaurants are before heading back. 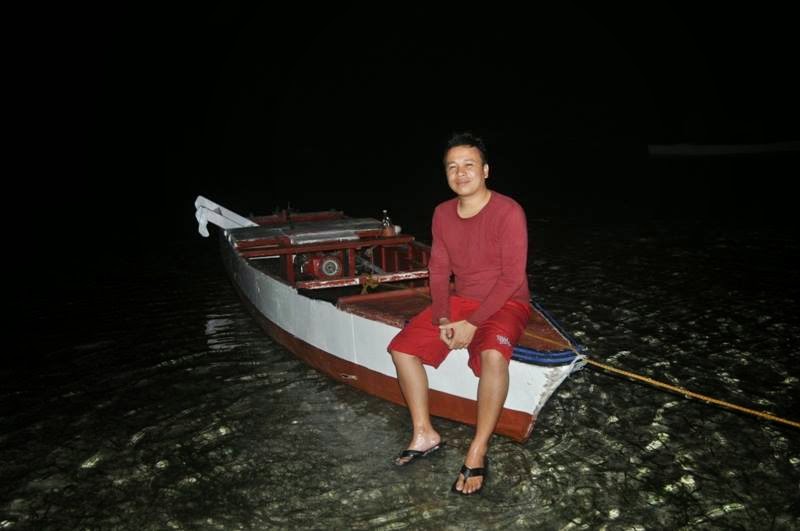 The next day, I awoke to friends laughing and saying "Mike, you had the loudest snore." It took me a long time and several travels to come to terms with snoring and be comfortable with it. Now, as long as everyone else slept soundly despite the noise, it doesn't bother me. I secretly revel in the triumph (that at least I won at something.. haha). 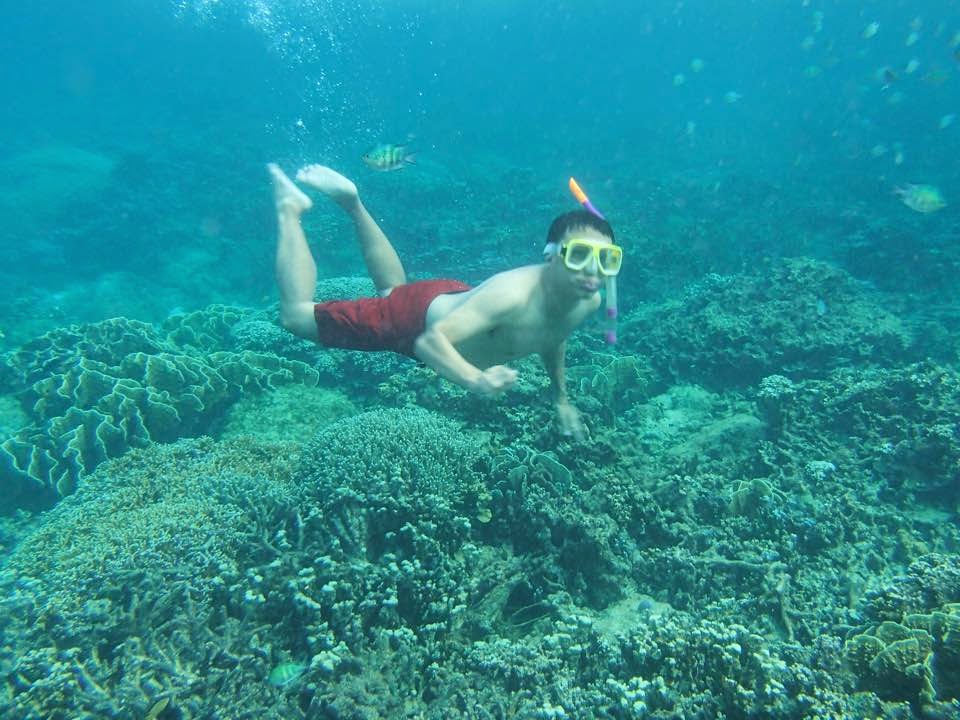 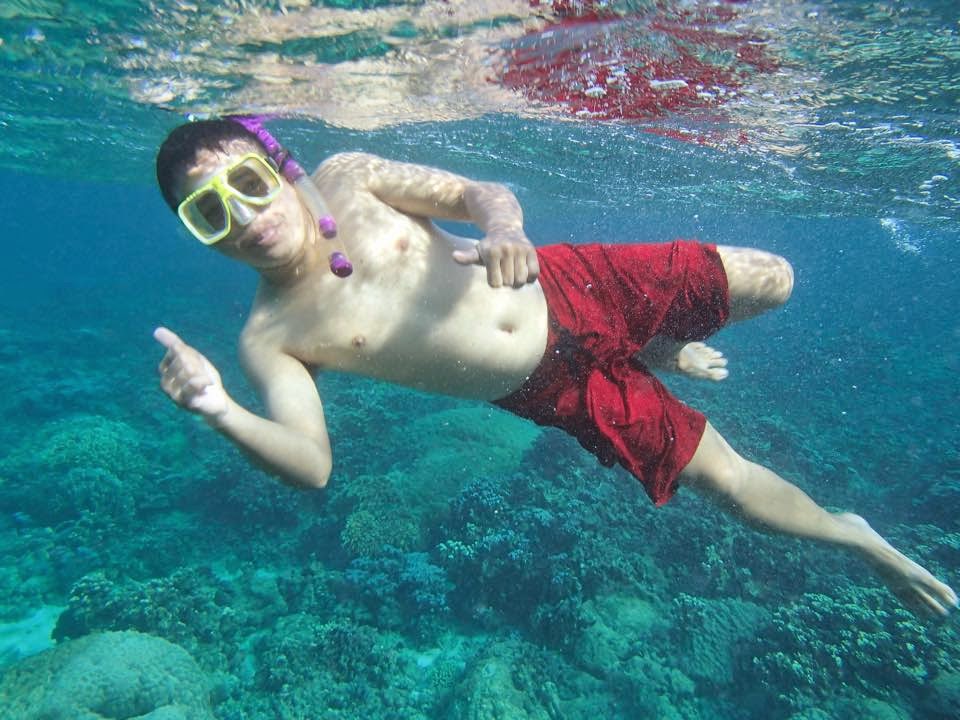 True as planned, we headed out for coral garden early in the morning packed with the leftover from dinner the night before -- ate breakfast in an open sea, dove, swam, snorkeled, danced with blue, green, black, striped, dotted, and colorful fishes. When we finished, we walked on the sandy white shoreline and bought some souvenir items before going back to the guesthouse. We aimed to target departure at 1 PM so we freshened up quickly and stopped for lunch at Kokay's Maldito Beach Resort. On the way to the resto, we were greeted with "hellos" from friendly tourists. 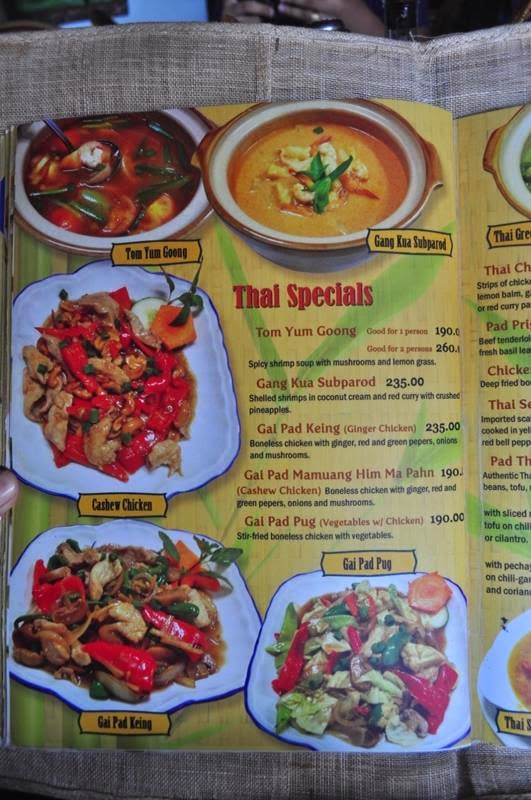 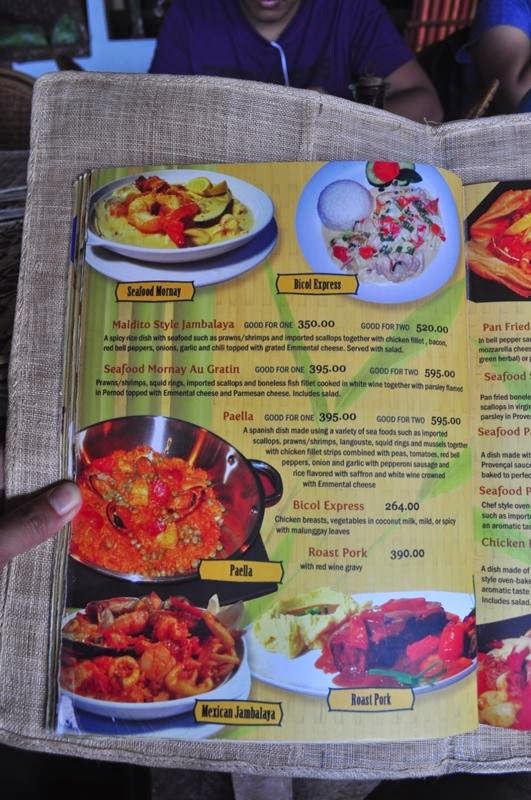 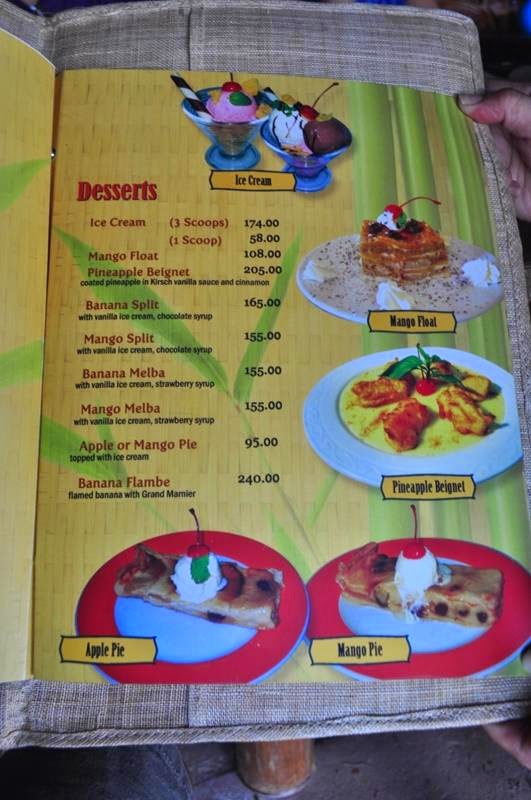 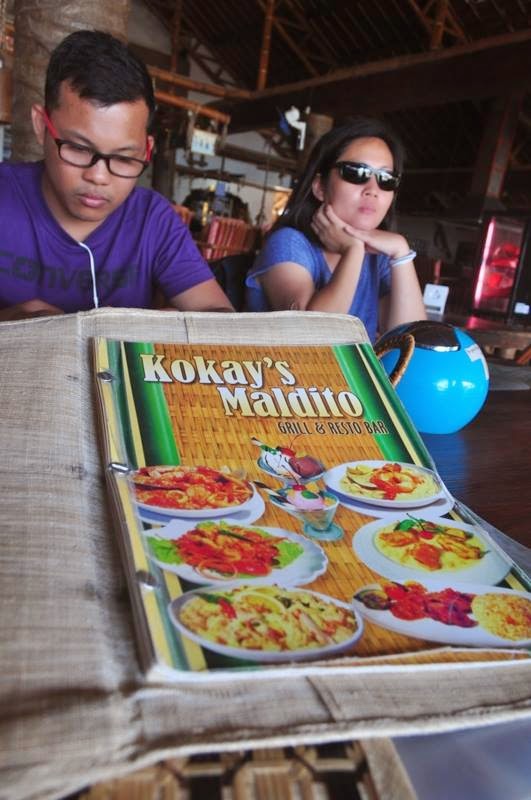 Maldito restaurant was certainly not a let down. We ordered what suit our personal appetites. I and a buddy decided to split in half Maldito Style Jambalaya and Gang Kua Subparod. For desert, I had a scoop of their homemade hazel nut and chocolate gelato. This was a perfect culmination to my second Malapascua trip. 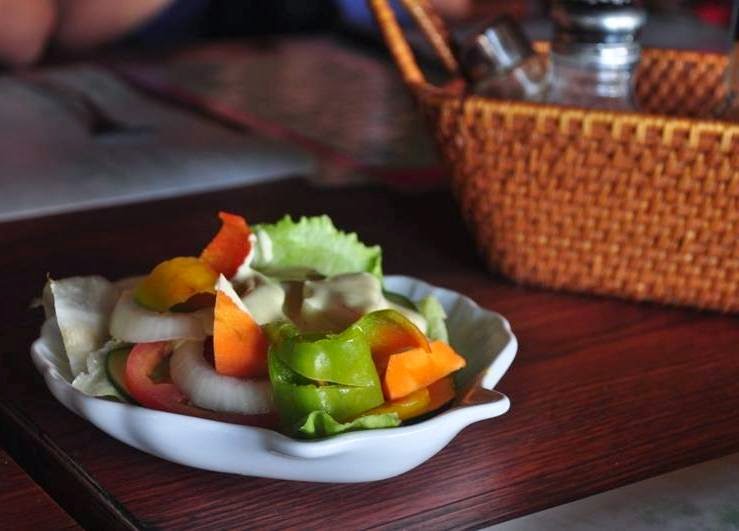 I realize now that a lot has really changed since 2009 but some good old ones remain. I wish I brought with me the pictures I once took with the locals' kids almost 6 years ago. I wonder if they have been given the opportunities for education. Are they still in the island? Did I walk past one of them on the same narrow road? Or are they like most already working for a living? Could they be one of those I saw in the restaurant holding thresher shark souvenir items for sale on one hand and an ice cream cone on another? It is possible. 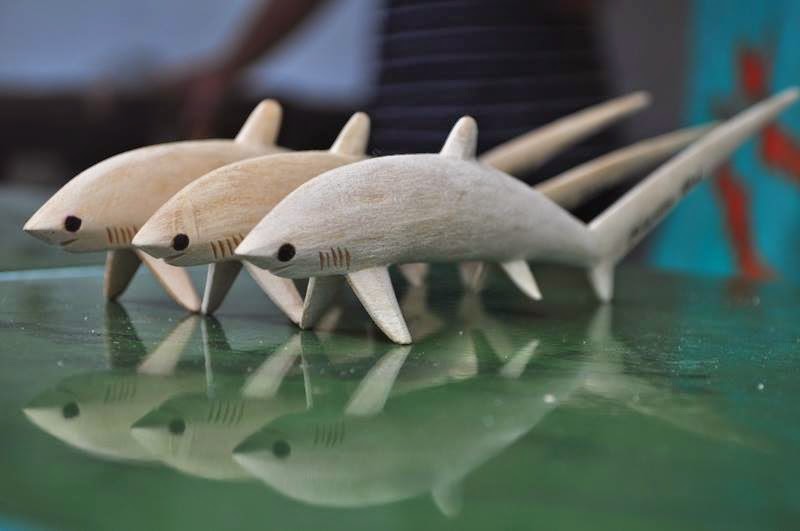 At the end of the day, I am just one of the many tourists who go to Malapascua. Roughly 6 years slipped and it has already drawn more crowds in, survived the world's strongest typhoon and the one after that, maybe economically improved but seemingly looking a little worn out. 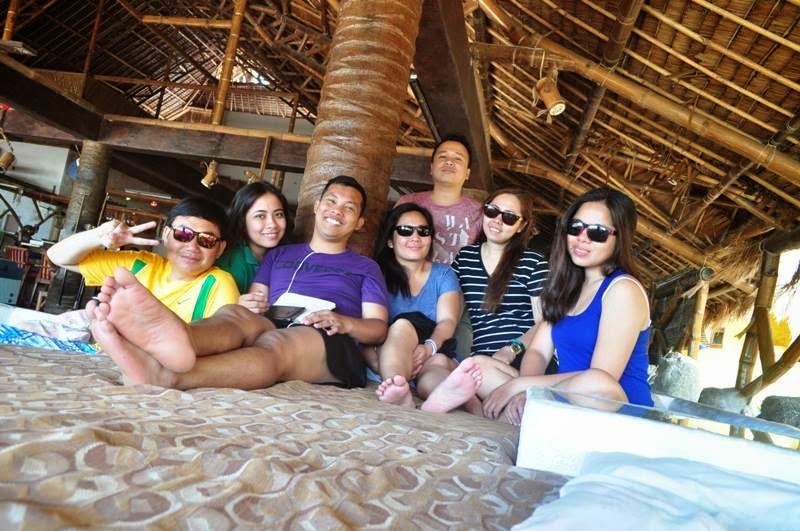