There Somewhere in Time 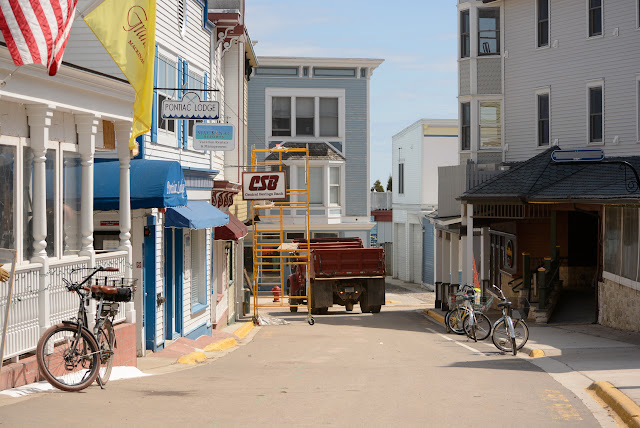 Mckinac Island is the famed film site of the movie, Somewhere In Time, starred by Christopher Reeves and Jane Seymour in 1980. Mayette was clever for bringing it up and selling it, hence, becoming our primary destination in this Michigan trip. Eight hours and more on the road yesterday was long. Thanks to a good night's rest, all four of us felt rejuvenated and ready to sail into the day's adventure.

We arrived a little late at the ferry terminal, so we settled to wait for the next boat trip to the island. It was already late March but the cold still bit in St. Ignace and an hour is too long to be doing nothing. I took my tripod and dared the chill to take pictures around the port area. My time flew as I watched birds fly over the ocean and into in the sky. The egrets are everywhere in US and I have not seen the lack of them, whether near the lake, in the suburbs, or even in downtown Chicago. I am amazed at how well traveled these birds are and I am oftentimes captivated just watching the graceful flapping of their wings and how unafraid they are from people. It is a comforting discomfort when they come too close. Moments later, I joined my friends back in the waiting area. 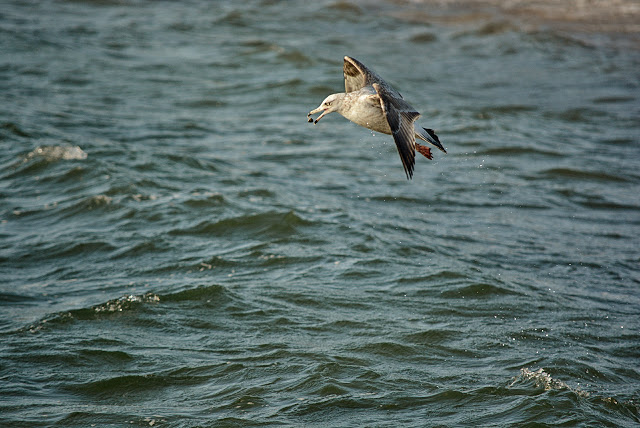 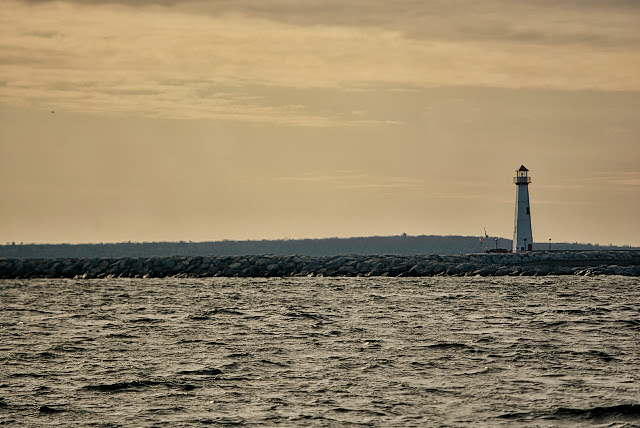 A few minutes passed then we boarded. The ride was making me remember of the island trips I had back in the Philippines. I realized that sea water in US is still dark blue, the same for their sky. The boat only bigger. I -- a lot shorter around six foot locals, my skin -- brown, theirs -- white, and some black. On board, too, was a Filipino couple who were tourists like us.

The boat had a decent dock and we were offloaded on a wooden platform. We stopped for the restroom. Across the door, a line of lockers were available for tourists who will pay for valuable/baggage safekeeping.

The island is small. Four hours on a bicycle, they say, is enough to circumnavigate it. Cars were not the popular means of transportation. Call for a taxi and a horse carriage will stop in front of you.

Tours in a carriage was popular in the island but sadly, we arrived a week too early for the season. Bicycles would have been an option but we have arrived too early for the day. The rental shops were closed yet. We were running out of options. The only thing I had left under my sleeves that day were hope and the audacity to start a conversation with locals. The horses have just been brought in from Mckinac City across the island and there were only a number of taxis in sight. We approached the driver of the carriage and asked if he could give us a tour for the price similar with the seasonal ones. He said No as the one he was on was really for taxi purposes. I looked around and there were not too many tourists. Eventually, I got myself on the phone talking with their taxi supervisor to try to persuade her to consent for a quick tour at $15 dollars each for an hour. 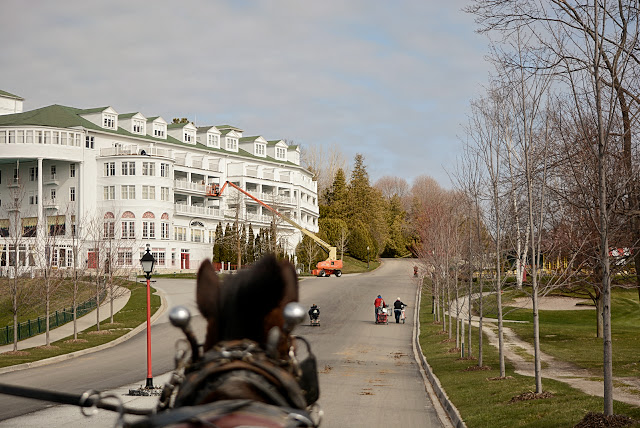 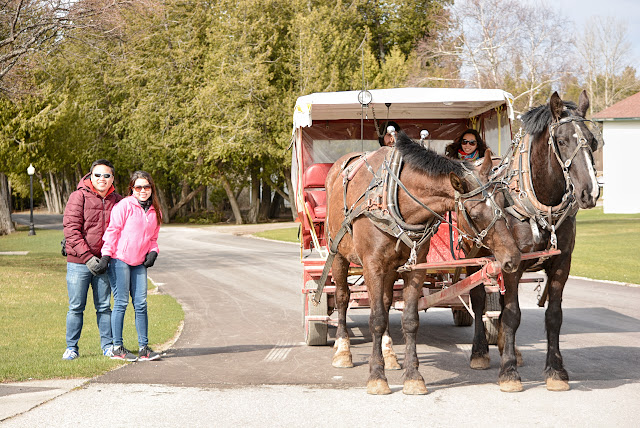 I and Mayette took the front seat to get a better view around and preferably good vantage point for photo opportunities. It didn't take us long to silently regret the decision as there was no denying the foul smell of horse poop. We did have the best view --- of the horses' behind, nonetheless! Good gracious!

While the horses trotted, we chatted with the driver. He was accommodating every question while he snorted from his colds which is likely due to the cold weather. Occasionally, I asked to be stopped at certain places for picture-taking. The horses paced by The Grand Hotel, the island's cemetery, the Governors house, some residential houses owned by rich people in Illinois, through forest roads and then back to the Grand Hotel. We tipped the driver for his gracious tour since it had already been over an hour. 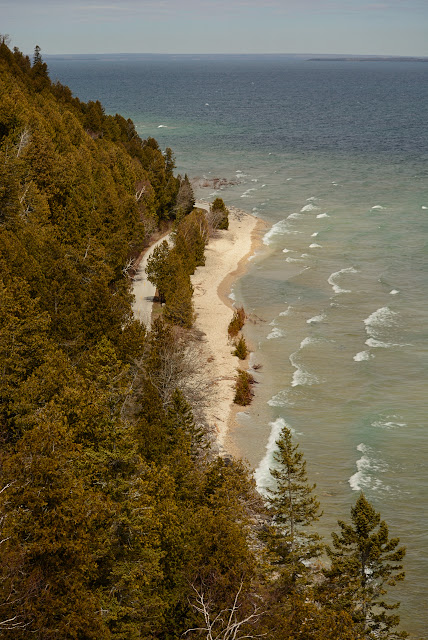 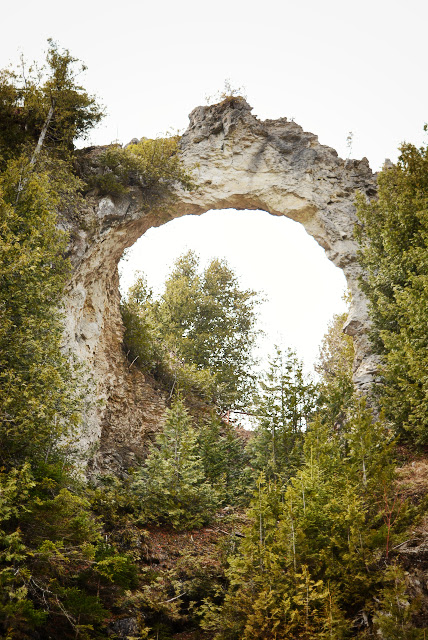 Everyone else were feeling contented but I was looking for more. Days before, I have done my research of the sites to see in the island and I knew there was the Arch Rock. We earlier passed by signs pointing to its remote location but my friends said they are not up for a mile walk and would rather just go to the docking area where the restaurants are for lunch. Like a sheep gone astray, I have removed myself from the herd and headed to the Arch Rock myself. GPS and instinct are really not the best of friends but this time they made the best of guides. Like a consolation, internet data was up and so I Skyped with my baby and showed her the beauty of the Arch from the top where the sea waves crash to the barriers that held the well-paved highway around the island. I climbed down a long stairway to the bottom to see the arch somewhat becoming a viewfinder to the big blue sky behind it. Suddenly the long distance felt near. I held the phone like I clasped her hands. I showed her the egrets, the lighthouse, the yacht club, the mini Statue of Liberty, until the phone's battery ran out. 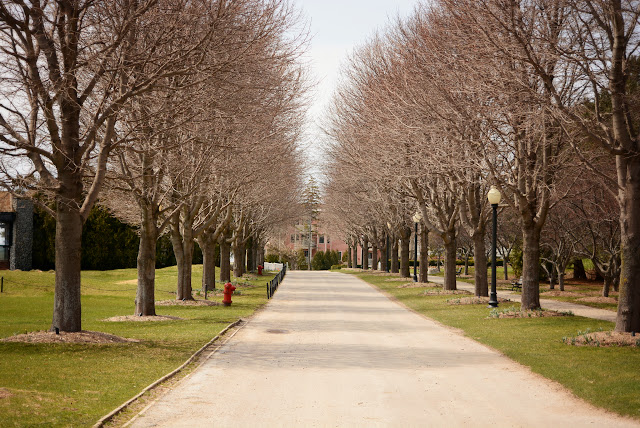 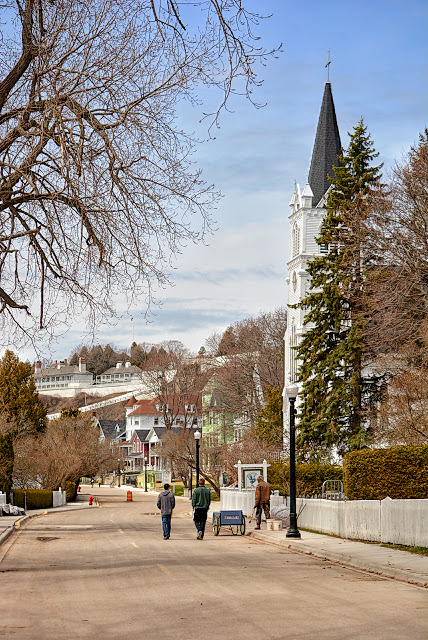 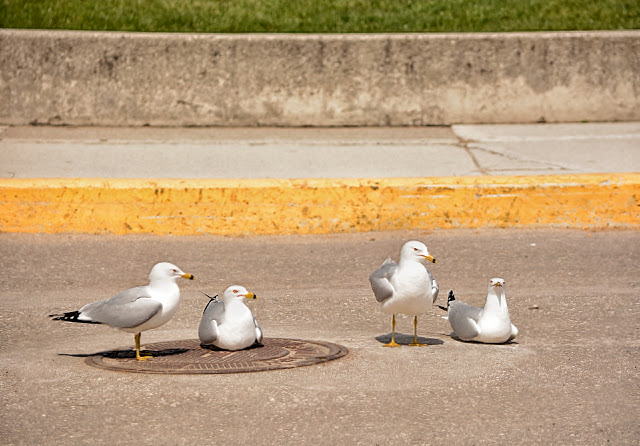 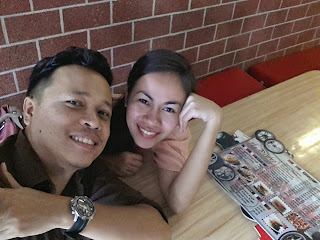 With barely enough power in my phone, I tried to locate the restaurant where my friends were and got reunited. For now, an enormous meal. Then, the lighthouse at Ludington.