“Ey, Mike.  I and Khonie are going to Oslob in a few days to watch the Butanding (whale shark).” Karl said on an unexpected meeting at Ayala Terminal one December afternoon of 2011. “They said the rates are cheaper now but will soon raise come early 2012 since the local government of Oslob is planning to make it a tourist spot.”


Now, more and more news about the whales’ visibility in southern Cebu spread, rapidly reached me, and I insistently told myself, NO.
An invitation came from Bee early January and she said they’ve (she and some acquaintances) plans of going to the place and asked if I and a few friends would come along.


When she sent a follow up message 2nd week of January, I finally said, “Okay. Let’s go there next weekend.”


It must’ve been the saturating word of mouth and the infestation of whale pictures in FB that got me hooked in the initially crazy idea of swimming with SHARKS. Movies like Jaws and Anaconda creep through me like mad imaginations of wild animals killing humans. I am a fan of the National Geographic Wild and its programs that shows how packs of lions prey on reindeers but I find it difficult to stomach the thought of humans as lions’ staple food. And because imagination has no boundary, I can’t help but typify lions to whale sharks, at least for the event I was scheduled to embark on. As the day approached, I mustered my courage and conditioned myself mentally, entertaining good thoughts saying, “..this could probably be just a one in a lifetime experience and besides the creature looked harmless in the pictures (like I believed myself .. tsk!).” I decided I should commence this experience with a picture of myself underwater with the shark at the background.”


And so we did. I brought along a few more curious friends, Rhandy and Melvin, Lorie brought a wagon of five, and Bee, the master initiator. I have to be honest, their companionship was comforting. I would like to think they thought of me the same way (naughty grin :D).


We arrived at Oslob just about 3 hours from the city. Although none of us knew exactly where the spot was, let alone Lorie and her troop who started the trip from across Cebu via fast craft, we knew we’ve arrived after seeing the glaring signs and billboards of Butanding right along the road kilometers away from Oslob proper. A crowd of people was our welcome scene and they were just all around the registration area which you wouldn’t even notice existed. Without delay, we enlisted ourselves and as we waited more and more people came in from different places and of different races.


When it was our time to meet and greet the sea giants, we hurried putting on the Php20.00 life vest which looked like a worn out cloth sewn around a styrofoam.  Then, the heart’s drumbeats began. And because we were so preoccupied keeping our balance in the very small canoe we were on, we became more fearful of a capsizing boat than the anticipated shark encounter. I, in fact, had to busy myself scooping volumes of water off the boat. For some reason, I felt that the boat had an orifice that’s keeping the water in but it wasn’t perceived as an impediment. In fact, we shrugged it off our shoulder fast when boatmen and curious lads started shouting in excitement at the sight of the humongous whale sharks. They looked playful as they swam after boatmen who kept feeding them a handful oftiny shrimps. When they started swimming round and about our boat, I knew it was time to swim for a fuller view of the fish. 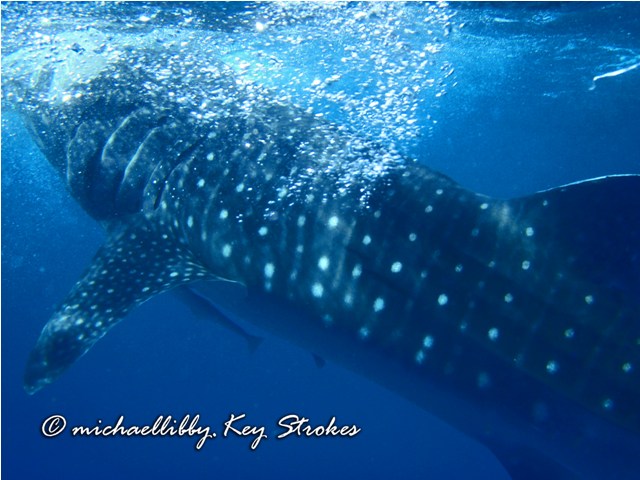 Using Bee’s water-proof camera, I took pictures of the beautiful whale sharks underwater. I was wowed in amazement of God’s countless masterpieces. I’ve seen beauty on land, but the water creatures were just as beautiful in many different ways. I wanted to touch them but pang of fear and self-restrictions held me. They were so close that I could just reach my arm out and I know my fingers will touch them. Afar, they look small but as they come near, their size grows way too large. And because I wasn’t too far from the water surface, I could hear my friends’ muffled voice saying, “…look behind you.. There’s more.” When I veered, I caught sight of one swimming right straight to me, and as if curious of Bee’s vibrant pink camera, it paused for a while and moved closer. Trembling to keep myself in composure with one arm on the boat’s outrigger ready to pull myself up anytime it lunges, I extended the ready arm with the camera to take a shot. To my disappointment, I must’ve moved too much that I caught only its back side as it started swimming away. There were a few more sightings, but not as close as that moment. 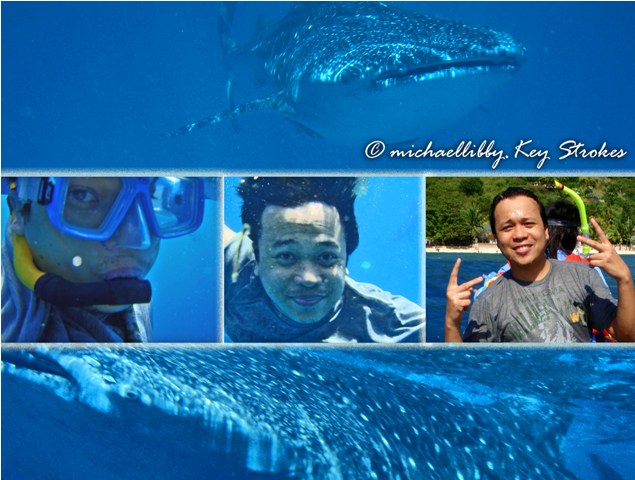 I refused to end the adventure without me taking a snapshot of myself with them somewhere in the background, but their speed was way beyond mine, besides, I only had myself to do it. My friends weren’t anywhere near skillful divers and the boatmen were busy keeping the vessel running, or “afloat” (tsk!).  We headed back home with everyone else content except me who jestingly whined like a crazy child who got a little short-served. All for the want to get a good shot of myself with sharks behind. Haha! Overall, it was a splendid experience and over-the-top start for year 2012 for me.
Before we end this blog, here are some list of do’s and don’ts interested folks can take note of should they decide to live through this adventure:
- Do not attempt to touch, ride, or chase a Whale Shark
- Do not restrict normal movement or behaviour of the Shark
- Maintain a minimum distance of 3 metres from the Whale Shark
- Do not undertake flash photography
- Do not use underwater motorised diver propulsions.
Other readings:
http://alistairdove.com/blog/tag/research
at 11:55 PM