The Splendor of the Shrine of Valor

The following morning, I woke up to find my friends heading out to the beach and I was left by myself in the hut. They came back excitedly describing a beautiful place they saw adjacent to the resort from the sea shore. I didn't give it much thought since the days schedule had me thinking. We had to be in Mt. Samat, Philippine-Japanese Friendship Tower, Bataan Death March's Zero Kilometer marker, Las Casas Filipinas de Acuzar, and by the end of the day, in Mariveles, Bataan so we can catch the earliest sailing schedule of the motor boats going to Corregidor Island the day after. Depending primarily on research made prior the trip, we started the day at around 9AM. 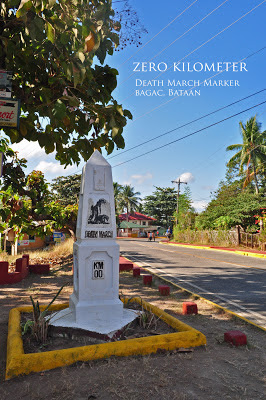 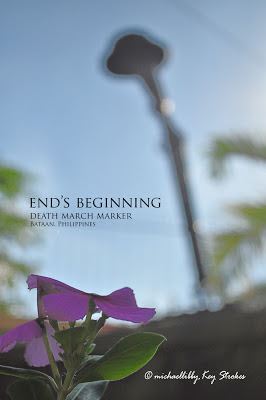 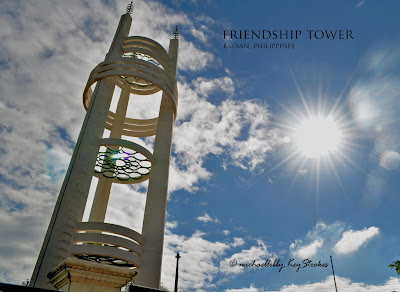 After checking out from Fajardo's, we hired a cab to take us to Camacho St. to take our breakfast at Ate Marivic's eatery. At around 9:30AM, we were ready to start our way to Mt. Samat. We found out that Kuya Willie is still asleep because he went home late last night since his motorcycle was hired to do transportation services for the teens who were going home from the JS Prom. We decided to just take another cab to take us to their jeepney terminal where we will ride to Dambana ng Kagitingan (Shrine of Valor). After arriving at the terminal, we had to wait for the next bus schedule which was about 30 mins from our arrival time. Conspicuously towering in front of us was the Philippine-Japanese Friendship Tower, a structure said to be put in commemoration of the time the Japanese made peace with the Filipinos after the World War II. After knowing from some of the passengers in the terminal that Zero Kilometer or the Death March Marker was not far away as well, we decided instantaneously to hit the road for it and be back in time for the bus' departure schedule. Five short minutes brought us to the Zero Kilometer Bataan Death March Marker through a motorcycle. We took a picture of it and although a little hurried, patriotic imagination filled me thinking about how the American POWs and Filipino soldiers must have felt that very day to stand at the area where their march was to begin onto what seemed like walk to death while guarded by Japanese armies. After that stop, we hired another cab to take us back to the terminal where the tower was and took hurried picture of it under the heat of the sun. Then we left for Mt. Samat. 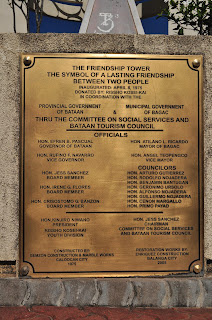 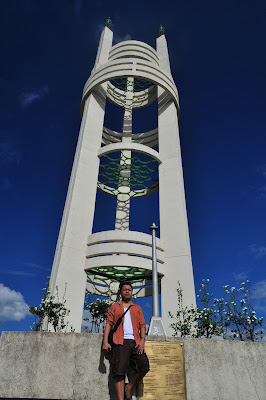 The drive took us a over half an hour. It was thrilling and I had to be on the watch so we can take sight of markers indicating where we will stop. Thanks to very accommodating locals who were very willing to give us directions. We stopped at a junction where the road bears an arc with the name Dambana ng Kagitingan. We had no idea how much we will need to spend for the ride to the peak but I guess we were given a fair offer of P100 per person. Tip 1: The trikes in Bataan are built with very small body that it can seat only 2 persons inside and 1 at the back of the driver. Even the seat inside the cab is too small to contain two average-sized males. Therefore, if you plan on taking the cab be ready for a squeezed-up ride to your chosen destination. On the way to the peak, we noticed that the motorcycle is overheating and that oil was dripping from the engine, so the driver decided to transfer one of us as soon as he chanced on a passing counterpart. The way to the peak was quite damp and cold. One must consider wearing a jacket on the way up (Tip 2). 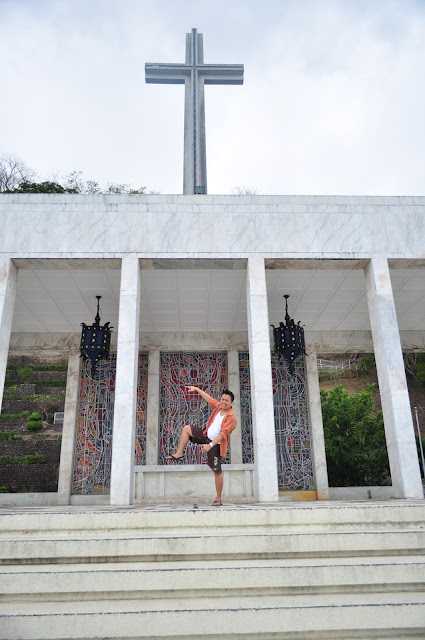 As soon as we arrived at the site, we were greeted by a huge metal gate. Right at the center is where the P20 entrance fee is collected. As if we knew there weren't going to be plenty of restrooms around, we took our restroom break near the gate. Walking up the hill to the shrine, you will need to climb up stairs until you reach a platform then more stairs upwards. On the platform, an open building stands where World War II Bataan history is etched on marble walls. At the side, an opening should lead you to an underground space where the museum is kept. Use of camera is strictly restricted inside since old and original guns of all kinds were kept inside for tourists' viewing. There were very old pictures preserved with inscriptions of what transpired then during the war. They were very detailed and visually informative that each time you read along every photograph description, one after the other, you can't help but feel sad and angry for our Filipinos who had to suffer the way they did in Bataan history. The rifles looked very impressive and you can't help but be awed at the sight of the set of weaponry which were most modern in that era. However, behind that amazement, is the macabre feelings of fear and sadness knowing that the same weapon may have annihilated ten and hundreds of soldiers who fought in defense and/or offensively. It was so quiet inside that one couldn't explain in simple words the emotions contained in that underground museum. It was melancholic, dark, and constricted. It was a chamber of memories contained carefully and discreetly below the platform. 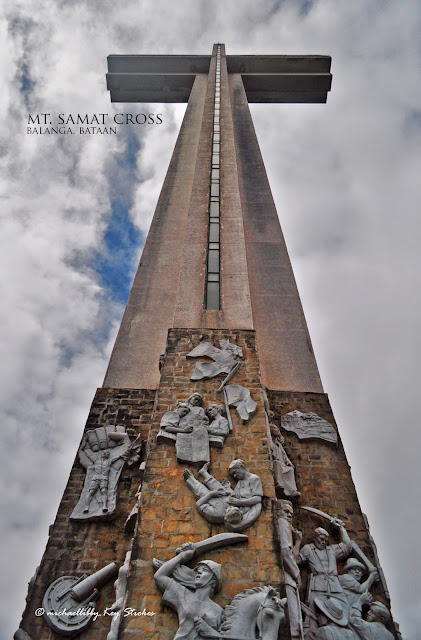 I went out and as soon as the cold breeze and bright light greeted us, the emotions shifted back to hype and excitement. This time, we had to climb the zigzag stairs, close to 500 (probably), up to the Shrine of Valor, the huge cross which was inaugurated in 1970, 4 years after President Marcos had the cornerstone laid in Mt. Samat. Just around the foot of the cross, there were souvenir stalls but not a lot of food stalls. Tip 3: It is still recommended that food be part of the planning should you decide to eat on the mountain. We went around the cross to find the doorway leading to the horizontal arms of the cross which was about 72 meters (approximately 10 floors) from the base. True as told, we just had to pay P10 to get us an elevator ride up to the arms. The elevator looked quite rusty and claustrophobics may find it unlikeable, however, it should be tolerable because the ride up takes only a few seconds to a minute. As soon as we stepped out of the elevator there before us is the spacious arms that can probably hold function activities for 25 persons on each wing. There were seats and the tip of the wing is the viewing area which is just covered with a round glass. There were also glass windows open on both sides to keep ventilation healthy. The round glass instantly became a popular spot for photography. I tried to explore the upper deck to reach the top of the vertical tip of the cross, unfortunately the door upstairs was locked and restricted from tourists. After 20 minutes we headed back down to the base. 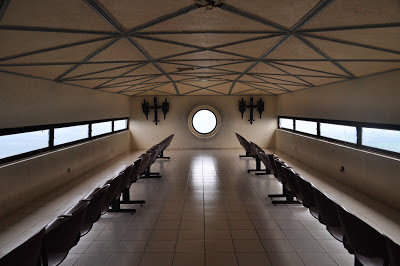 At the foot of the cross, anyone can gaze in appreciation of the well sculptured figures of heroes like Rizal and figures of Filipino men and women. I wasted no time and ignored shame, sat down, then lay down to get the best view from base to the tip of the cross. I'd say the result was splendid glory after shameless guts.

Next, as if being conscious of time, I went to a deck where we are able to view the mountain from the hilltop. We noticed that it was also an access road from the entrance where vehicles can reach the plaza near the cross more conveniently. There were already cars parked near the area. I was taking close pictures of trees and flowers when suddenly noise loudened from a place not too distant from where I stood. I looked to find out what the commotion was about and discovered that a large number of mountain monkeys started invading the area. They were becoming plentiful every minute and they seem closer as they advanced towards us. They weren't rude. They were just expectant of maybe getting something from the crowd - tossed food items or anything interesting. They were all around the tree branches and I have never experienced being among wild monkeys in my entire life, let alone select friends who look like monkeys (no pun intended, just jesting :)).

My Mt. Samat experience, despite our running against time, was very physically, mentally, and spiritually refreshing. It was a place suited for personal retreat and introspective activity. It stokes a sense of patriotism and love for the country God has chosen for Filipinos to be born from. It engages you to discover the reasons behind who you are and how history has contributed to self-awareness. Similarly, it encourages people to give more appreciation to the freedom and liberty we get to enjoy at this era and time.

Next destination: Las Casas Filipinas de Acuzar.
See also the first of this Bataan blogathon prior to this - Befriending Bataan and The Past Today.