Cubana: More Than Just a Lounge

Pubs lately began sprouting all around Metro Cebu. It seems like there is no stopping businessmen from venturing into this type of establishment nowadays. Somehow entrepreneurs just really know how to study society and the people consisting it. They know that the emergence of BPOs and the opening of jobs in Cebu has lifted the economy up enough to bloat the number of middle earning families even higher to be capable of buying more. This big chunk in the social class is the target market of the newly opened pub in Mango Avenue, Cubana.

"Cubana" according to its Turkish owner, Cem Tasci, sprung from his love for Latin lifestyle, energy and enthusiasm. He envisions to bring in a similar energy in Cebu. At present, Cubana has recently been through its soft opening but is planning to go full blast sometime March this year. Cem (pronounced "Jem") promised to bring in entertainment like never before seen in Cebu bars and pubs. He shared future plans of staging nightly shows in his club like belly dancing, Latin dance, and others he thinks the audience might be interested in watching. Aside from that, he may hire regular bands to play in his club for at least 2 hours. He doesn't have any as of yet, since he is still deciding as to what music genre he'd like played. He is an artist and would like to take his time conceptualizing, how he'd want the activities to go as the days come. Other improvements he would like to do as well would be providing a greater variety of dishes and meal offerings in his menu. He admits the lack of desserts and other entrees as of the moment but positively assures the putting up of whatever comes appealing to his target patrons.


Here are some information you may need to know upon your visit to Cubana. It is located at the busy street in Mango Avenue. It is a little pushed from the highway but not really difficult to find. If you are okay walking along Mango's red lights district, you will come across the junction where Yellow Cab and Kalidades Flower shop stand. In front of the flower shop, the lit Cubana signage should be able to point you the way to the site.


The first welcome sighting is something my friend calls more of a mediterranean setup of chairs and tables adjacent to an open bar at the sidewalk. The area is dim but accented with little light coming from lamp posts. A healthy and well trimmed plant covers the rooftop giving a dining experience that feels like eating outside in the garden at nighttime. Just as we thought that was all there is to Cubana, we were surprised even further when we learned that they have a bar inside the building. Their Entrance is designed with bright lights walled around the arc hall into the main door. The 100 peso fee will ensure you a bottle of beer as soon as you are seated inside.

There are huge cushioned sofas that look very convenient enough to suck awkwardness out of your body. Loud funky music fills the room and the only bright spots were the Bar area where drink concoctions are mixed, the stage with all the bright dancing neon lights, the DJ cube, and the window access to the bar kitchen. As soon as we were seated, we ordered their recommended beer match, Crab Rangoon with cream cheese and Chicken Croquette. Both dishes tasted perfect in terms of saltiness and texture although quite similar in the manner by which they were prepared. They too tasted a little the same except that the other one was fried in wonton wrappers and the latter in flour breading. Lettuce added beauty in the presentation, fresh, and edible.

As courtesy from the owner, we were treated for another round of Crab Rangoon and this time paired with a plate of Gambas and toasted bread. Gambas, a Spanish delicacy was quite an offering. The shrimp, skinned and sauted in minced garlic and olive oil was very spicy that its flavor shoot up through my nostrils. I suspect that the garlic must be responsible for that palate kick. And for some reason, I liked it a lot.

Some corners in the bar were meant for groups who prefer privacy. Those spaces can accomodate 15-20 people exclusively for team events at the price of a consumable 3000 pesos. There is also an area where you can play table soccer. For most of us, simply staring at the lights display were sufficiently mesmerizing. Their equipment look very expensive which could explain how it is capable of presenting the laser light rays in seemingly 3D visuals.

Visit Cubana in this location. 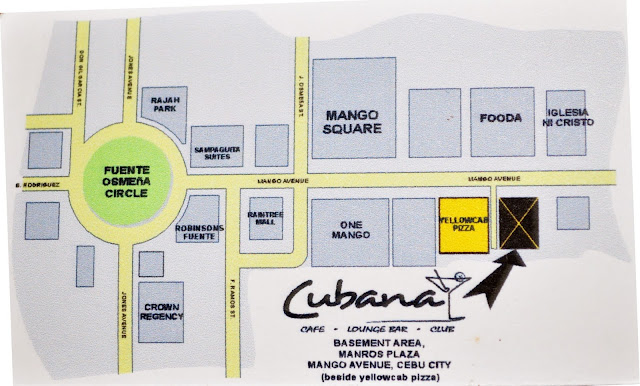