The Escape to Palanas 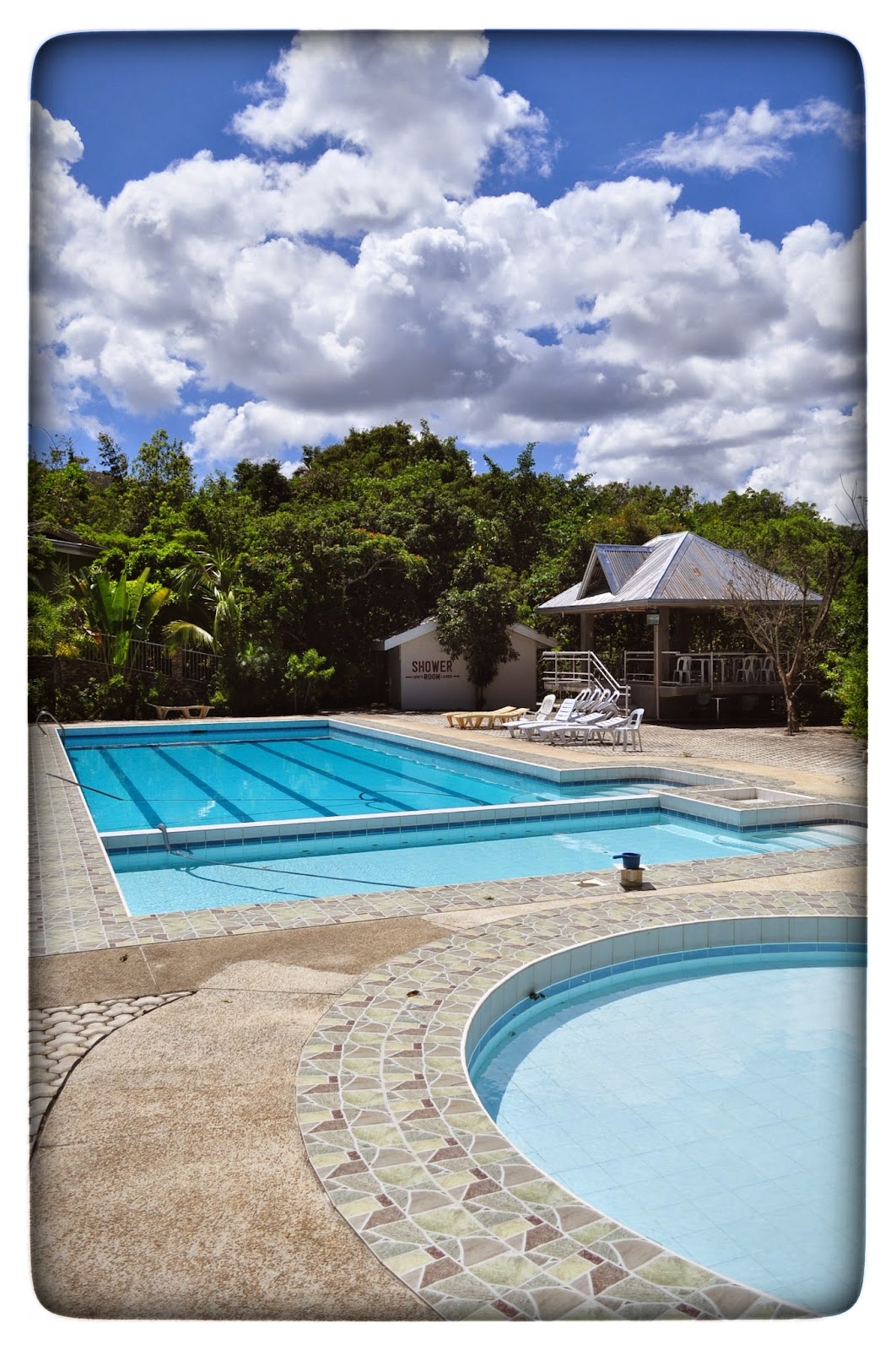 Quiet, private, tall trees, mountain views, a swimming pool or a beach, fresh breeze, food, and comfortable accommodation -- my elements of a perfect escape. Once in a while the urge to separate from urbanity becomes a necessity for a working person. Overworking can be stressful and science concludes legitimate translation of stress to physical exhaustion and fatigue. If not dealt with, it can potentially lead to more chronic issues such as ulcers and other physical diseases. 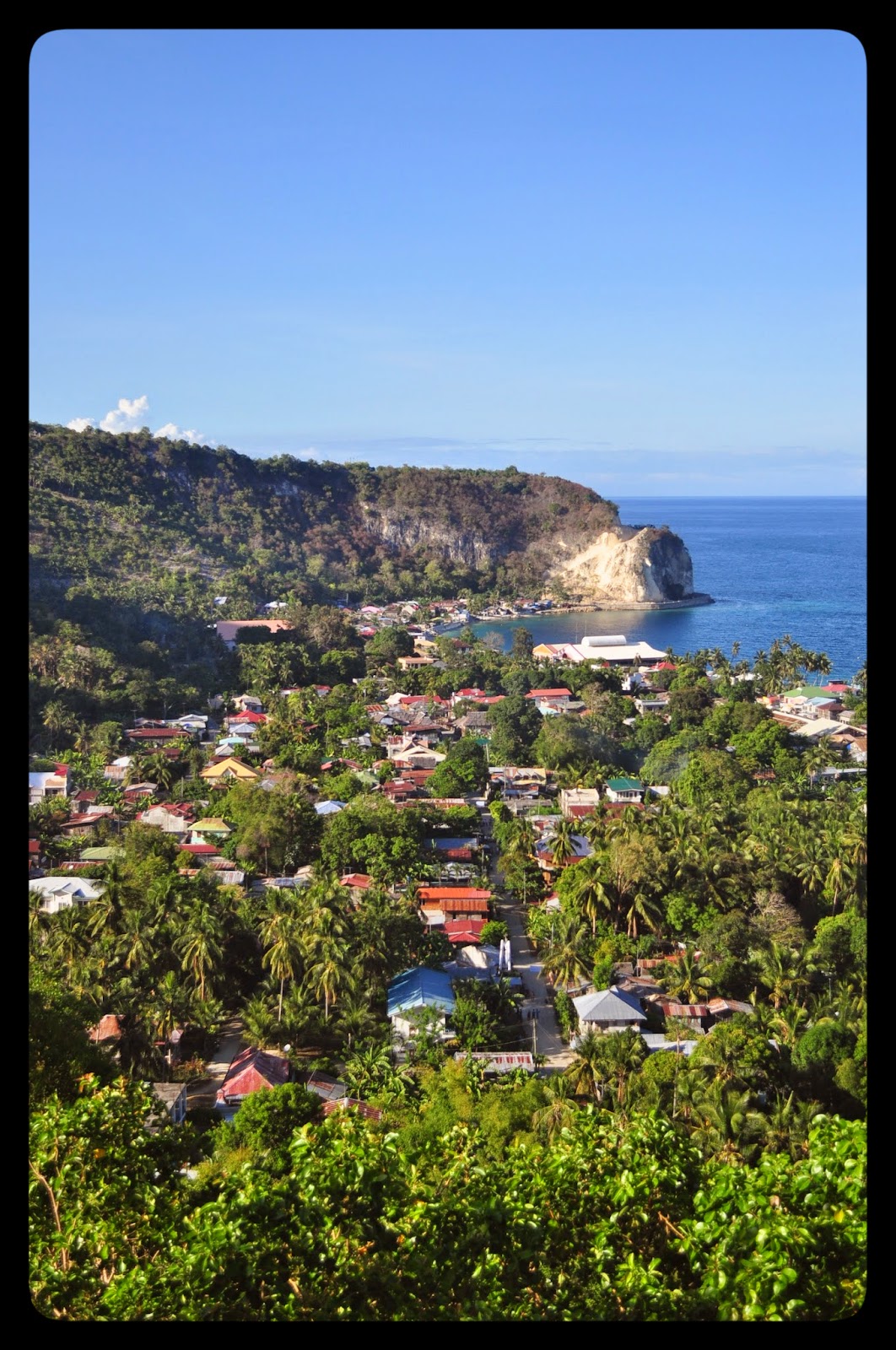 I have an unspoken bias and liking for the eastern part of southern Cebu for many reasons. Firstly, it is my regular route back to Dumaguete (my hometown) on land. Secondly, travel spots are everywhere in the south. You have places like, Carcar (famous for lechon, chicharon,  and old Spanish houses), Argao (famous for Torta), Alcoy (stretch of white sand beaches), Dalaguete (more beach resorts and Osmena Peak), Boljoon (home of the old Spanish church and Ilihan Rock), and Oslob (swimming with the whalesharks). And just as I thought I have been to this part of Cebu enough, there are always new finds that trigger your travelling feet.

One time, I passed by a sign that took my attention. It read "Palanas: Farm and Mountain Resort". I looked it up in the internet and the pictures were enticing. I knew I had to be there so when the opportunity came, I took it without hesitation. My friends were enumerating options about where to go for a summer getaway south of Cebu. I injected Palanas and I was secretly happy they voted for it, too. 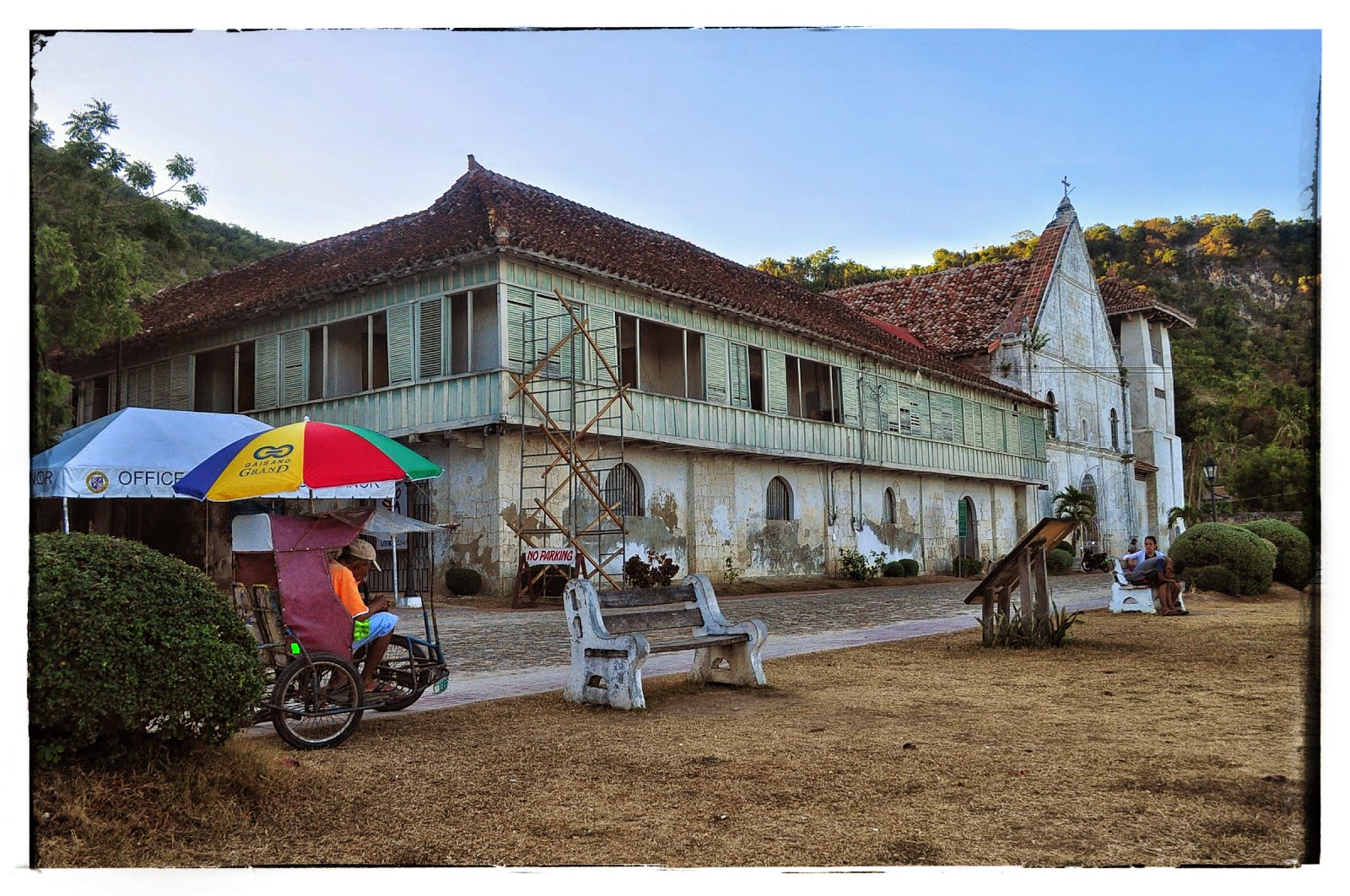 Ready with my 1.5 kg Carcar lechon and a knapsack of personal travel necessities, I traveled ahead to Boljoon. While waiting for my friends to arrive, I took snapshots of the old church then sat on a chair under the tree shade watching tourists come and go. As soon as my friends arrived, we looked for an eatery where they feasted on the lechon I brought from Carcar. Right before riding the motorcycle to the farm, we bought a kilo of fish, squid, and some spices from Boljoon Market.

The ride up to Palanas was priced by the locals at P100 per motorcycle but my friend decided to pay P120 and took 2 for all three of us. It was about 20 to 25 minutes ride up the mountain passing through a provincial rode that was sometimes really close to cliff edges that had no railings and should the motorcycle collide with another, it could literally send you hanging by the edge. Some sporadic pine trees were great consolations along the road and as much as the view beyond the cliff were awesome, I dared not stare too long because my imagination goes all over the place in the absence of protective railings. 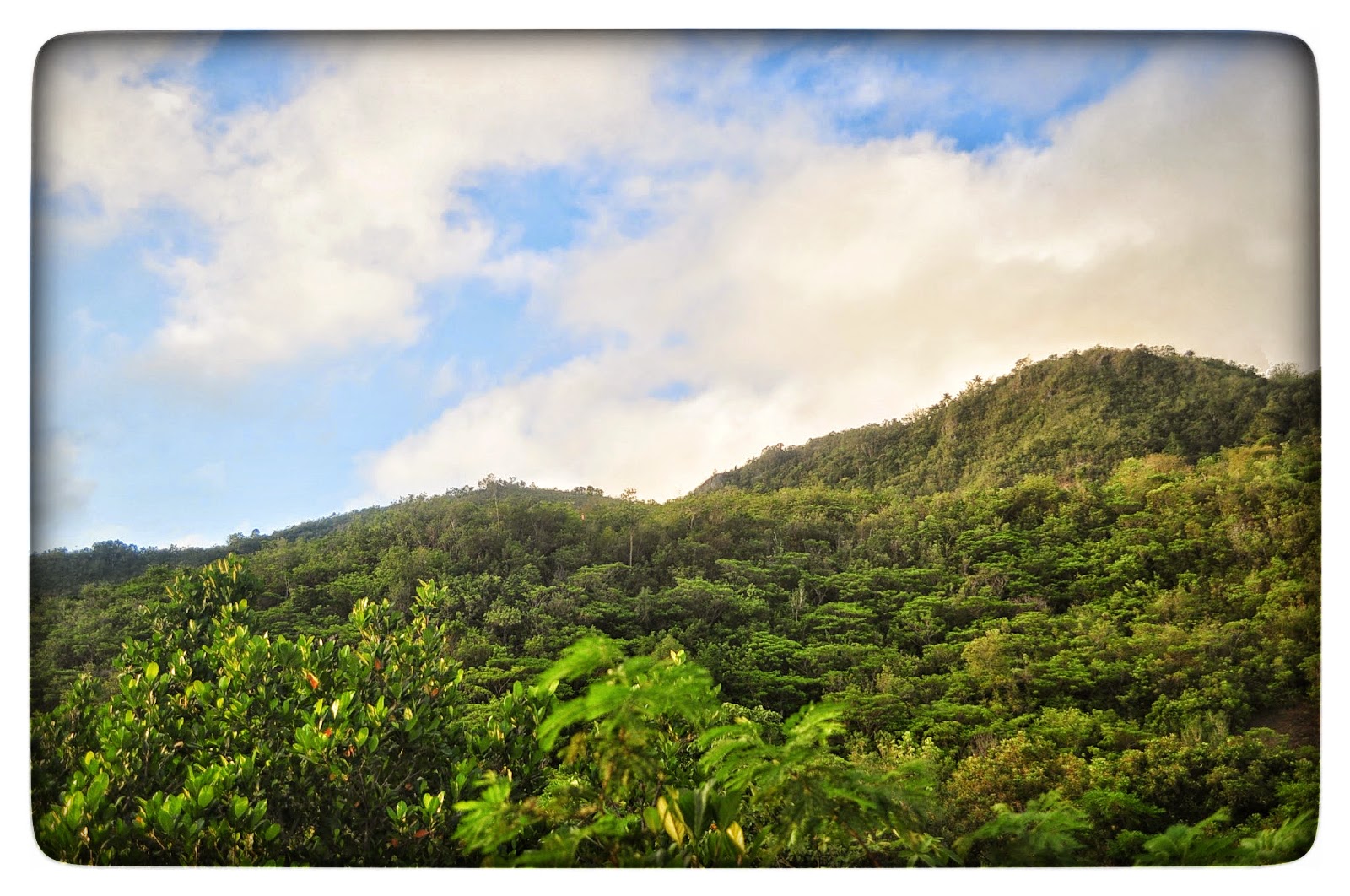 Finally, we arrived. A tall steel gate was the entrance to the resort. It was already 4PM and everything inside were teeming with greens. Hanging vines, exotic plants, white-petaled gumamelas, tall labeled trees, subtitled with a common name or a scientific name. It felt like going into an educational tour back in the days. 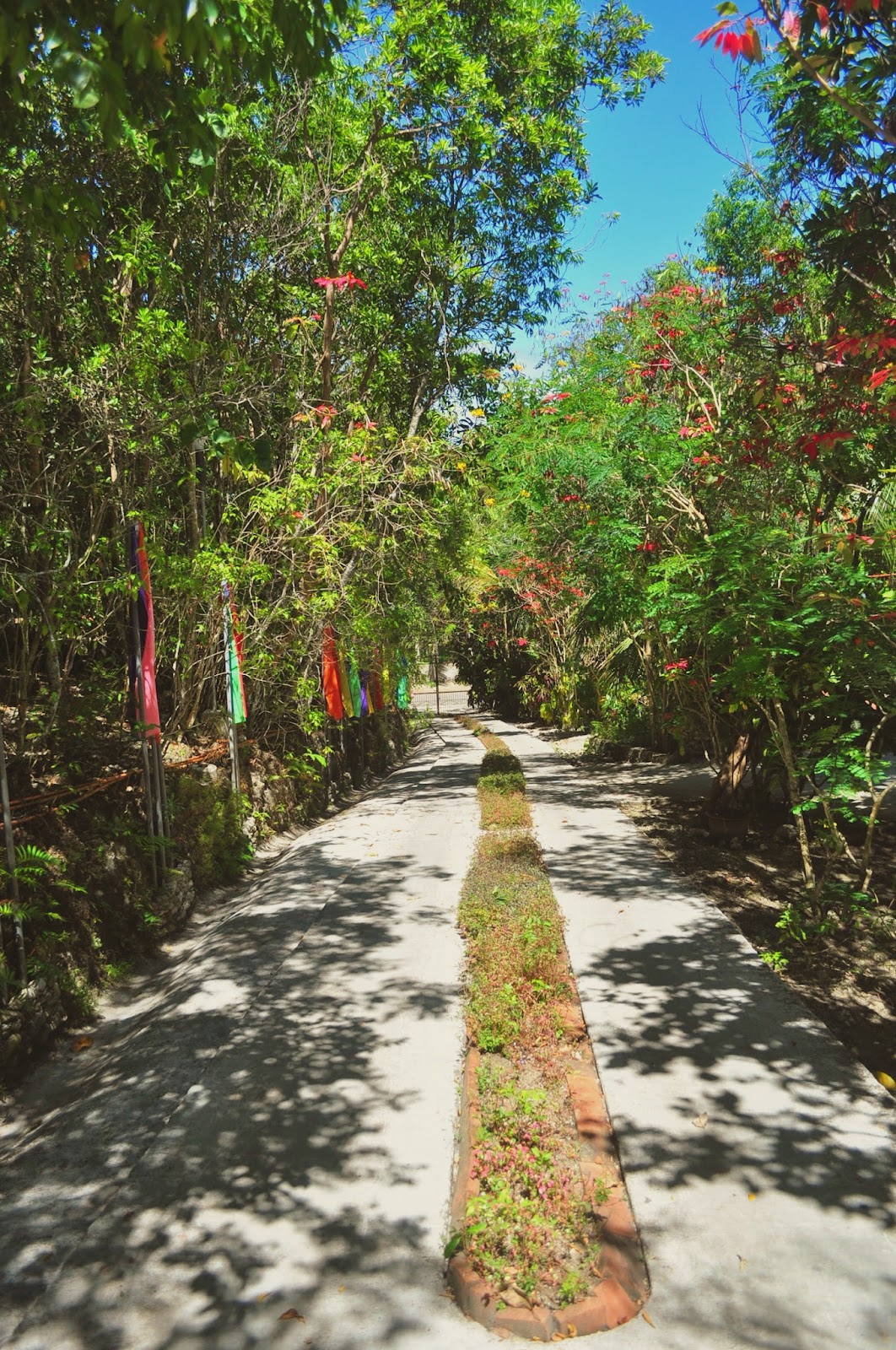 We were escorted to our accommodation. After leaving personal belongings, we toured the roof deck. Right where the stairs end at the top showcase the mini bar / kitchen. You don't have any idea what kitchens do to me. I went nuts and my happy cells bounced excitedly while wearing a regular expression. My friends stood at the open roof scanning the surrounding mountain backdrops with "wows" and "oohhhs". I blurted my share too but it was first upon hearing Kris (the receptionist) say "THE KITCHEN IS ALL FOR YOURSELF because you are our only guests sleeping in this building for the evening". "Whooa" beat that! Looking at our spice inventory, I said, "I may need some salt, some pepper, and lemon grass. Do you have these items for sale?" She paused, then said, "I think I can get those to you for free." "How about cooking utensils, frying pan, laddle, a stove, gas, plates, forks and spoons?", I went on asking. She said, "I can get you those too. And do you need a rice cooker?" Nah.. my jaw dropped to the ground. She was willing to provide all items I needed.
=== !!! may i pause for a somersault !!! ===  She lent me their rice cooker!! Other than the kitchen, she explained that we will be charged an hourly rate of P100 for every hour we consume using the karaoke device. My, my, my.... did you just give me two of my favorite pastimes? Any last hint of sanguine tendencies in me went alive. 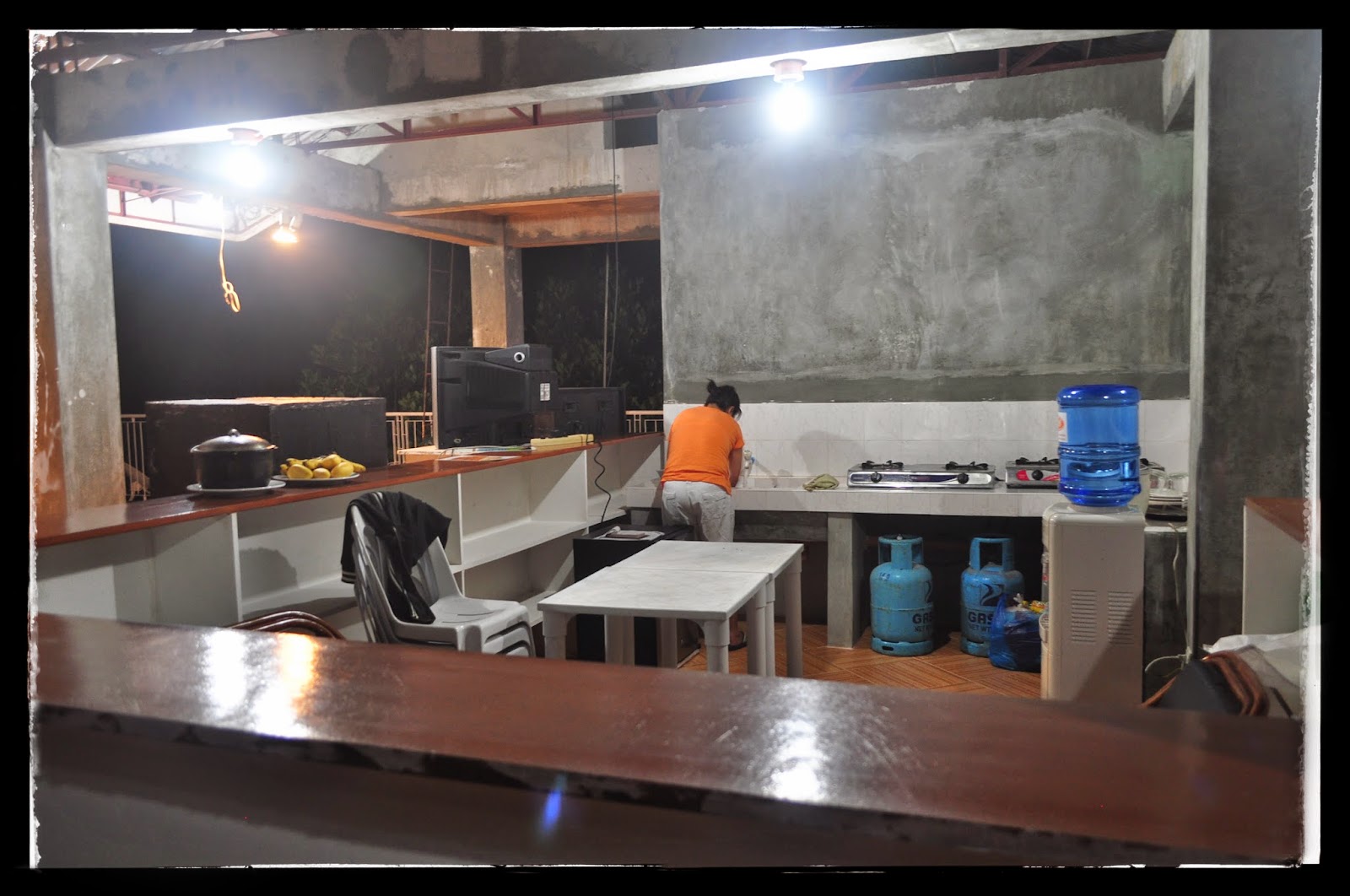 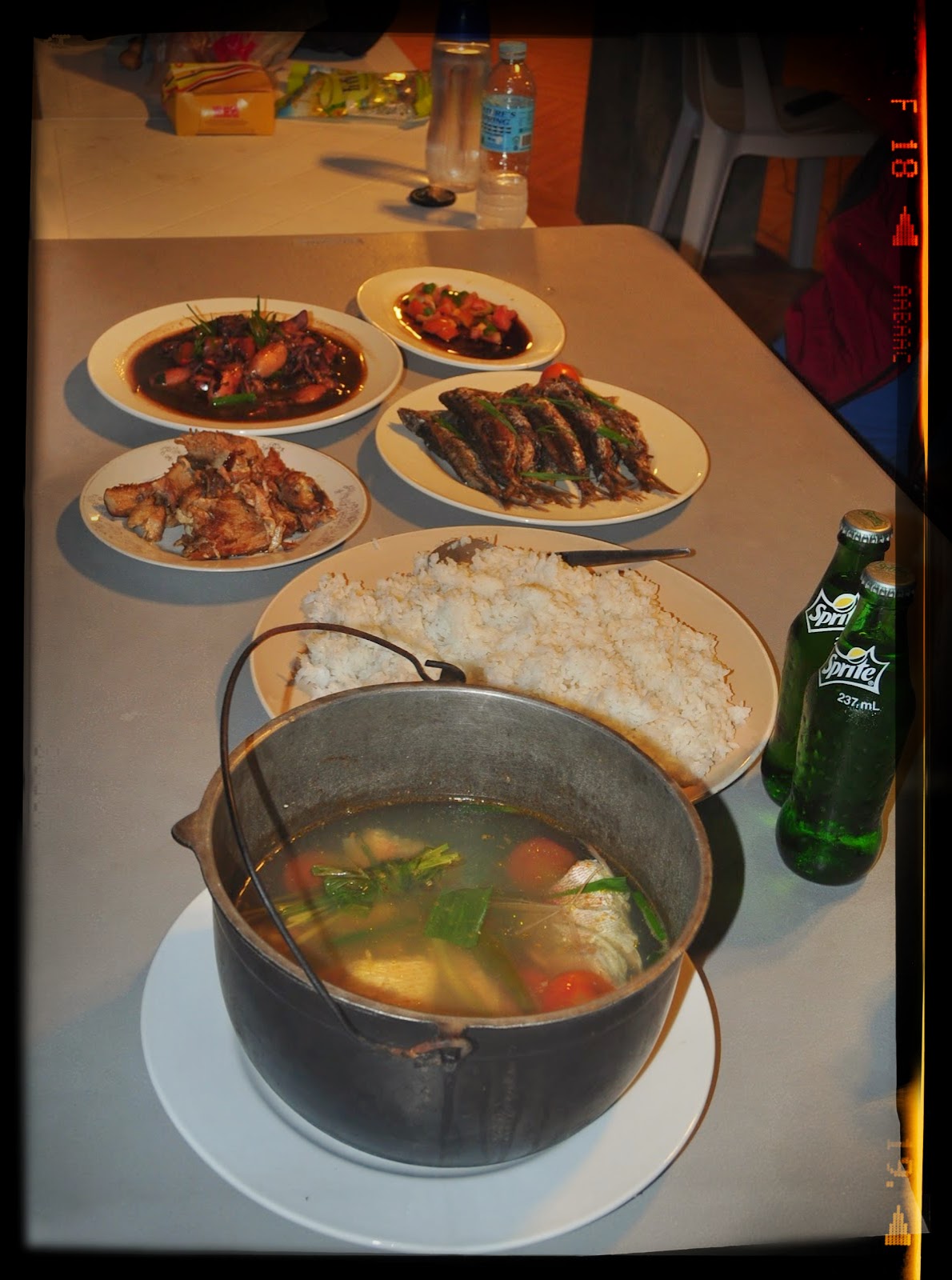 That night I cooked for us Fish tinola, lumayagan (squid sauteed in onion and garlic), and fried fish. There was nothing better than dining on a roof deck, just you and companions, eating sumptuous dish, under shining stars and bright moonlight. The mountains hid behind pitch-dark backdrops and silence was gently broken by turkey gobbles and insect buzzes. I grew fond of one strange bug that didn't budge even when I went too near to take my sharpest photo. 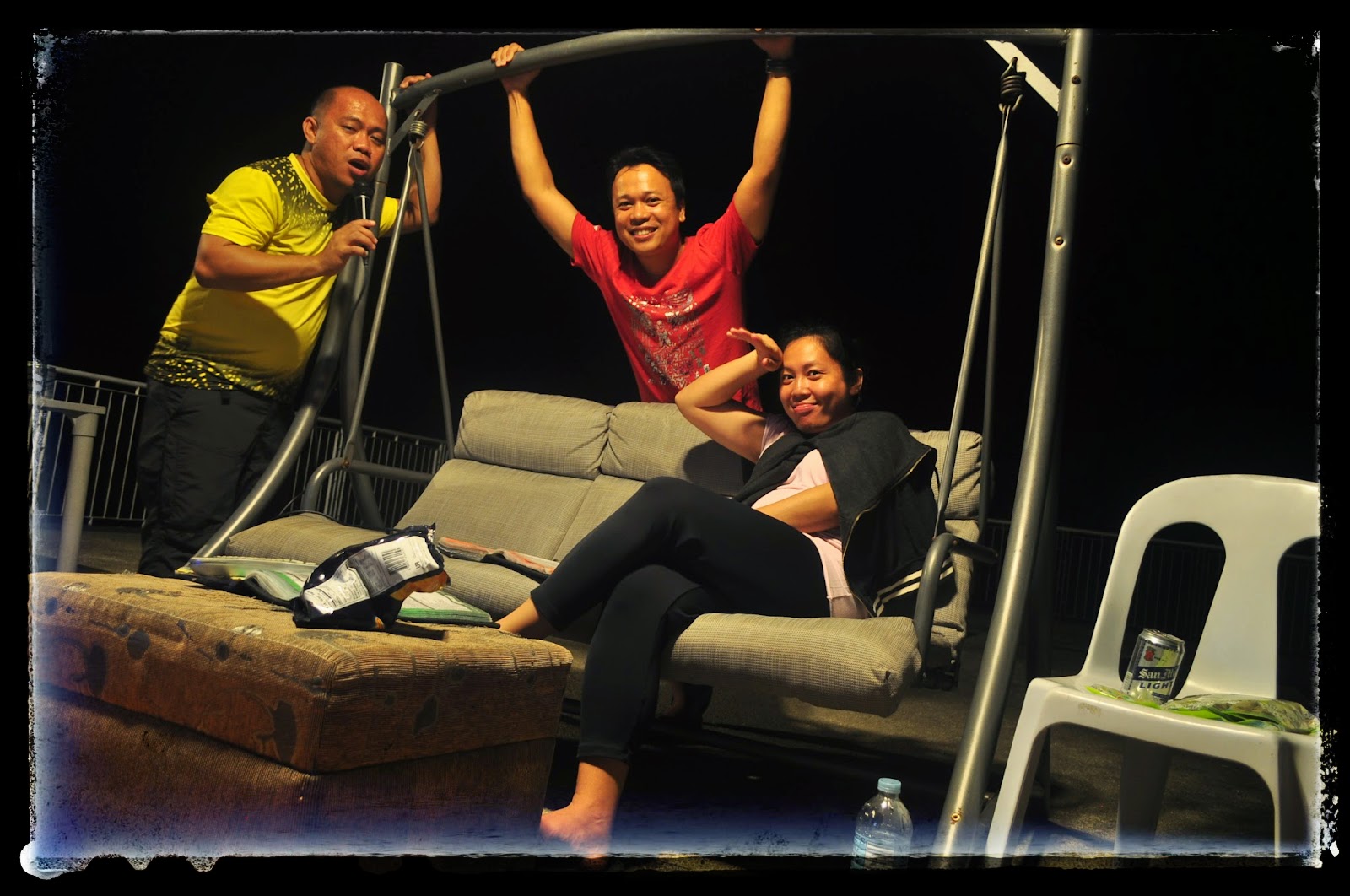 After dinner, loud karaoke started. A clan in reunion were also doing their runs and rifts at a nearby function hall a few meters away from our building. You are kilometers above sea level! What do you expect? So we sang as loud as we could not minding the neighbors a hill away. I hope no animals or fouls died after we have disturbed them on their sleeping hours. When we could no longer sound a note due to exhaustion, we lounged on a swinging canopy bench directly staring at the moon glowing at the wide black expanse until my companions dozed off to sleep. I was drawn to the glorious moon and so I took snapshots of it. Sadly, none registered sharply. 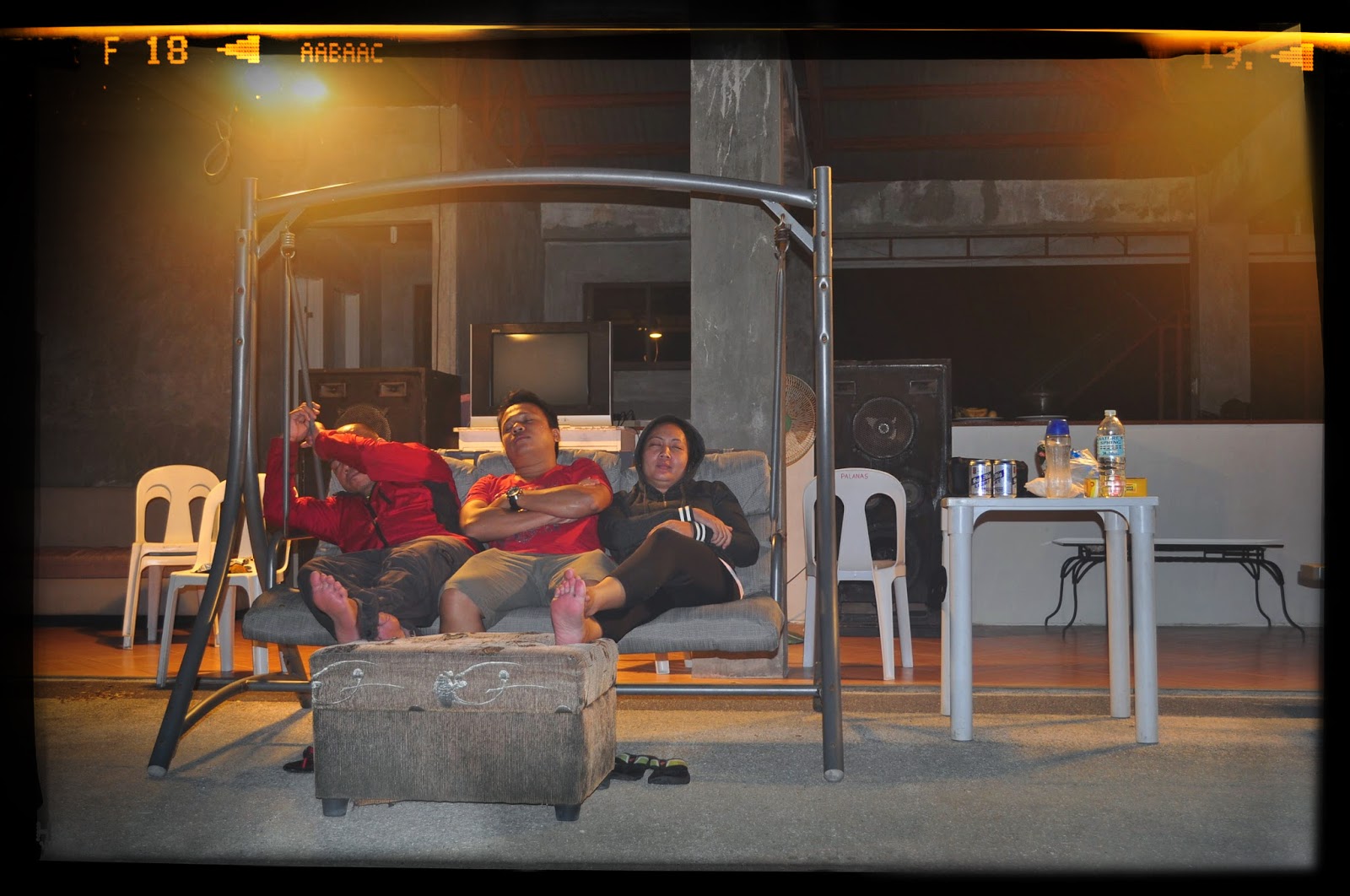 After a while, we settled onto our respective beds. A white butterfly I saw fluttering on the hallway followed me to bed. 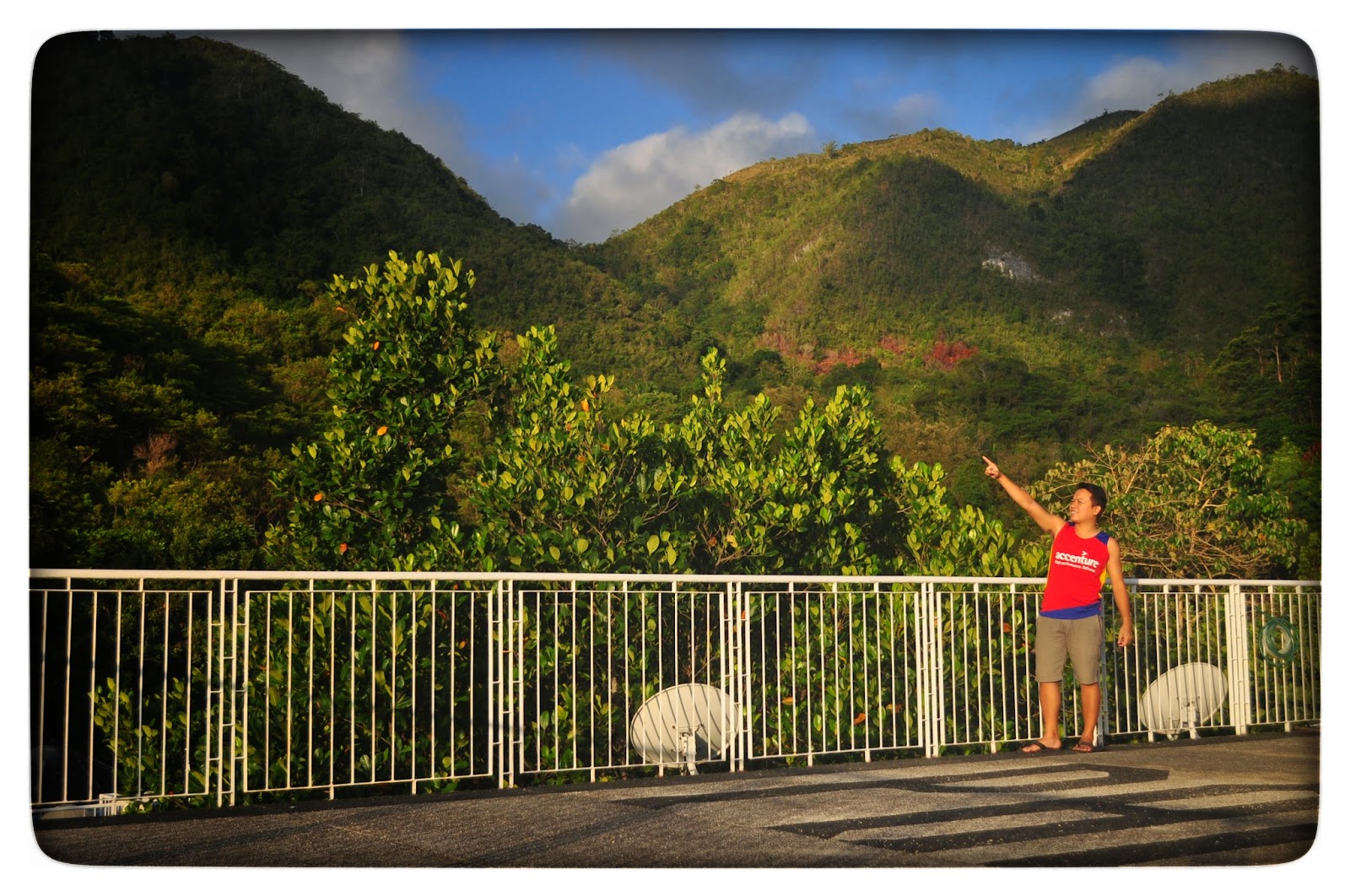 The next day, I woke up early to fix us breakfast: bulad (dry salted fish), egg omelet with lots of tomatoes, fried rice and what was left of our food the night before. We ate until we were satisfied and ready for a walk in a park.. uhmmm .. i mean "ZOO". Palanas has a mini zoo. A steel gate facing our steel gate exit was Palanas mini zoo. It's time we met with the gobbling turkeys, grunting ostriches, wild colorful fowls, cat-fox, tortoise, bleating sheeps and lambs, cows, python, and monkeys. The low hanging trees also had us climbing and of course a picture with the lone aircraft inside the forest. How in the world did it get there? 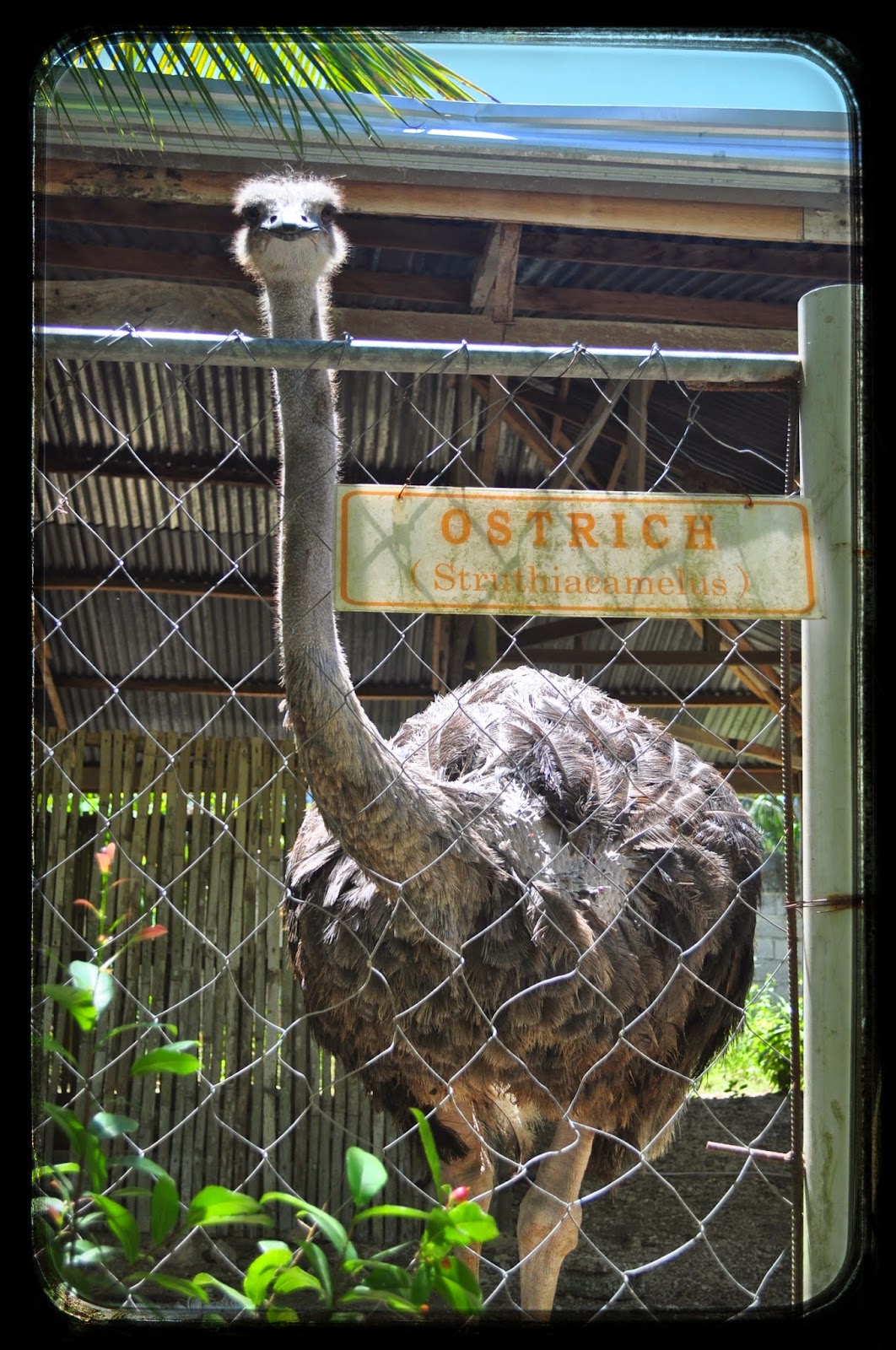 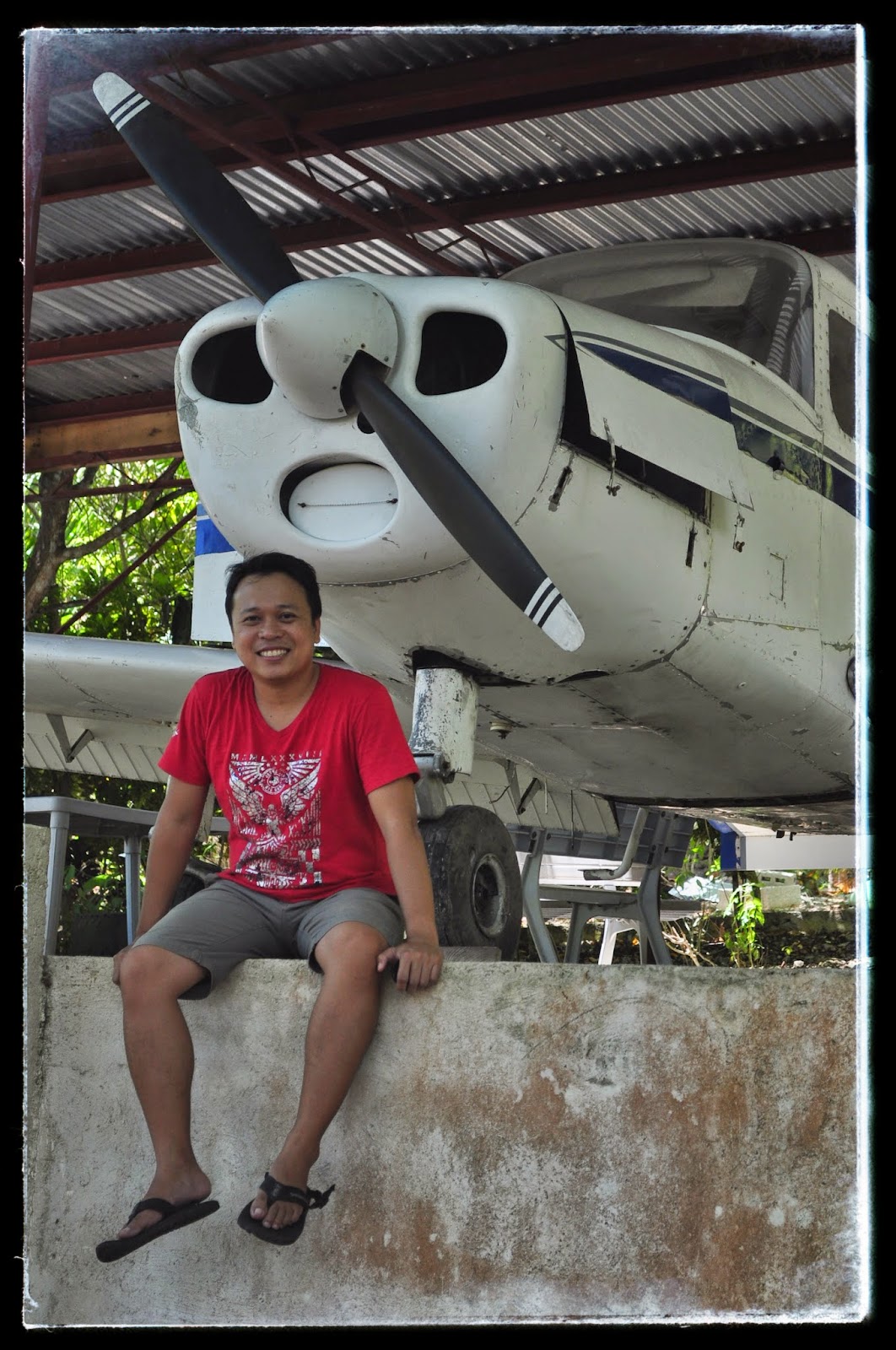 Lest we start liking the zoo life too much, we headed outside and then back inside the main farm to stroll along their fish ponds. And if the ponds were too murky to spot a fish, there are the glass aquariums. The swimming tilapia just had to be fried butterfly tilapia for lunch. While waiting for the food to be served at the roof deck, we settled for a dip in the pool which later became swimming, and then water sliding. I had the most fun since I was late to get off the pool. Surprisingly, in a very remote location, these pools were well maintained. The water was very clean despite the growing trees around it. 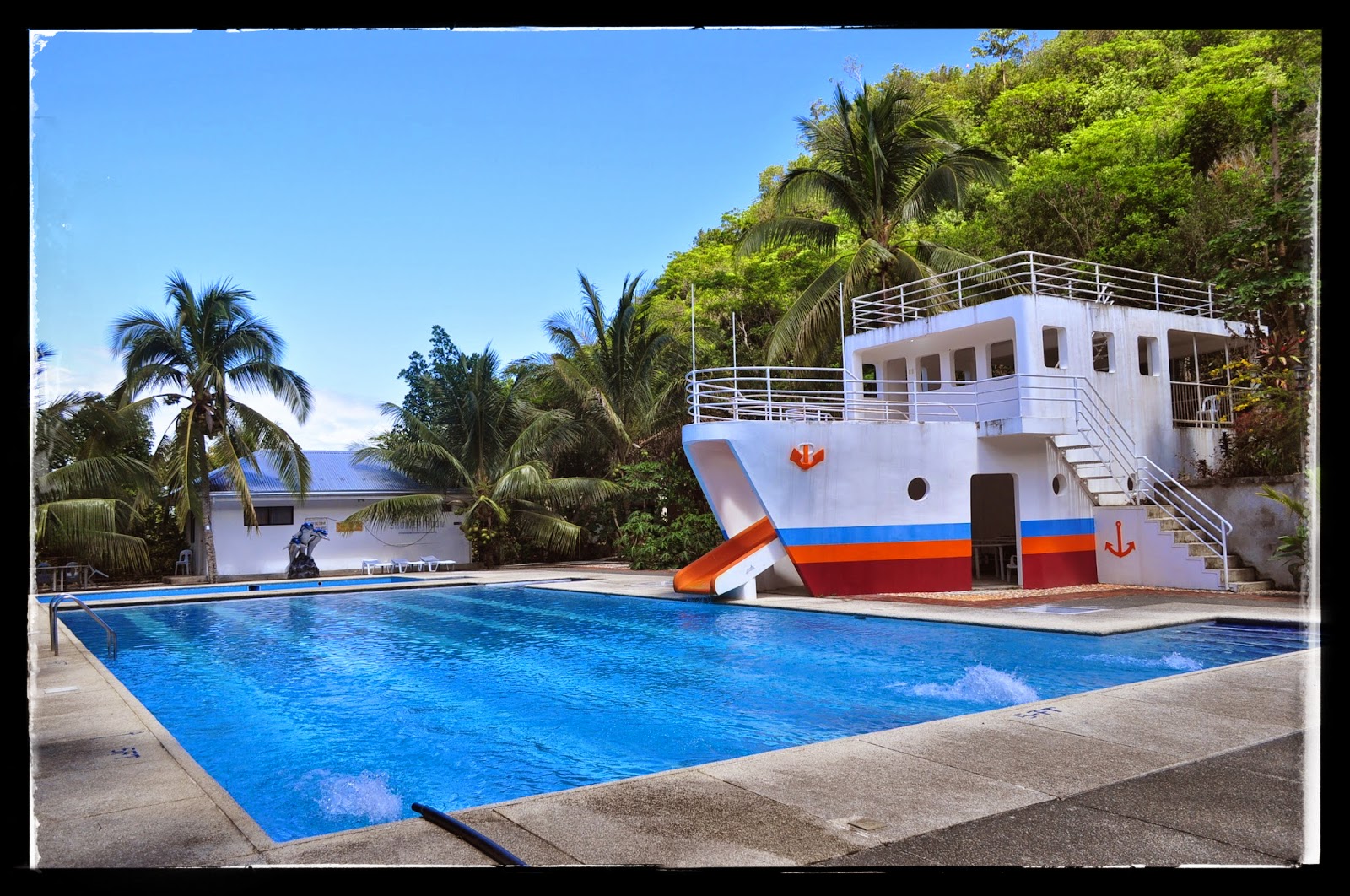 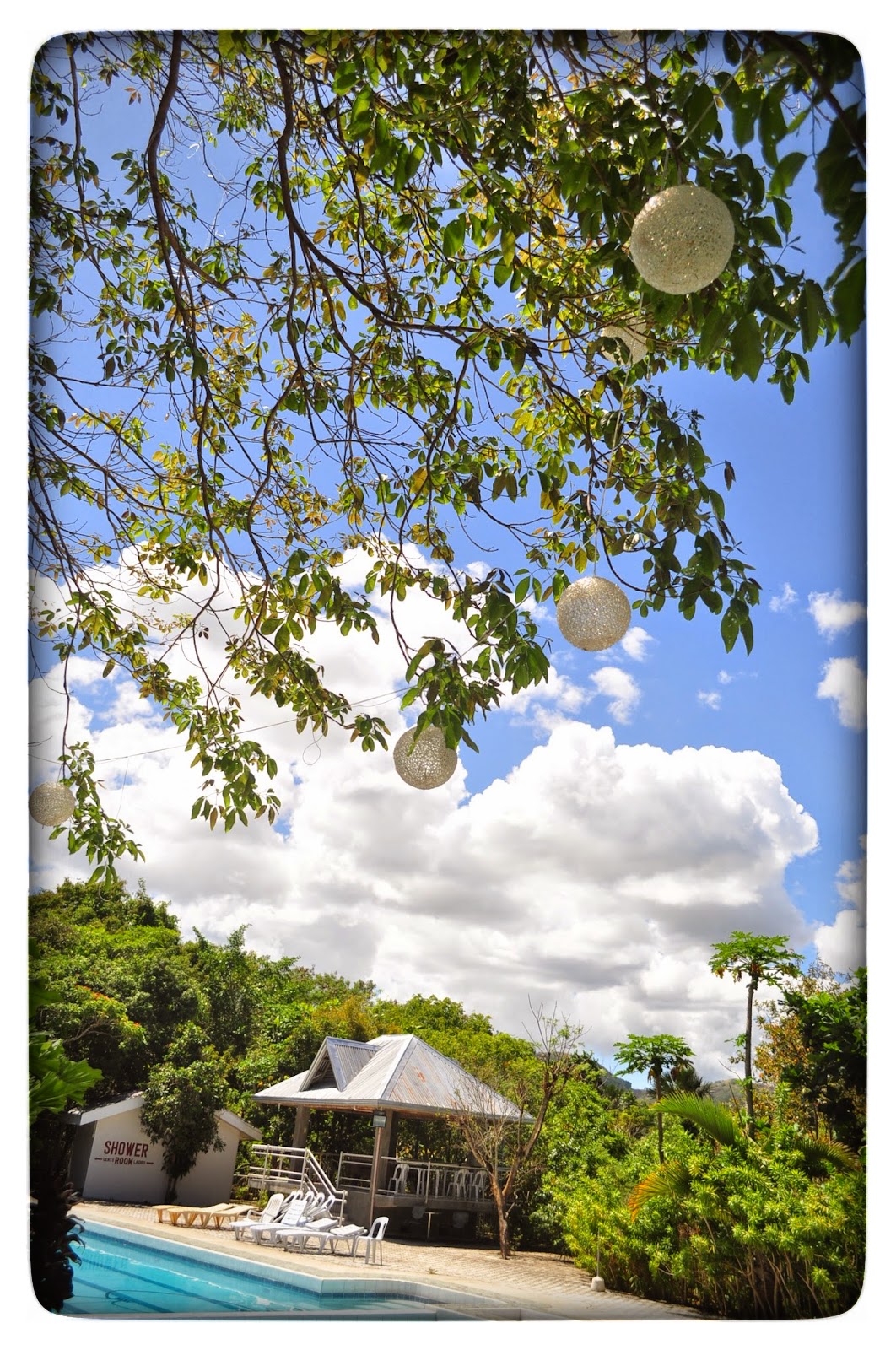 Finally, lunch. We were very quiet. Although unspoken, but it was sad leaving Palanas too soon. If there was only a way of storing fresh air, I would have already hoarded a lot so I could share it while sitting in a jeepney along Escario and Capitol Streets.

There was not too many spots in the vicinity that had access to Sun network but we were lucky to catch one enough to call the motorcycle driver in Boljoon market to fetch us from the resort. We bid goodbye to the crew and said we will return someday. 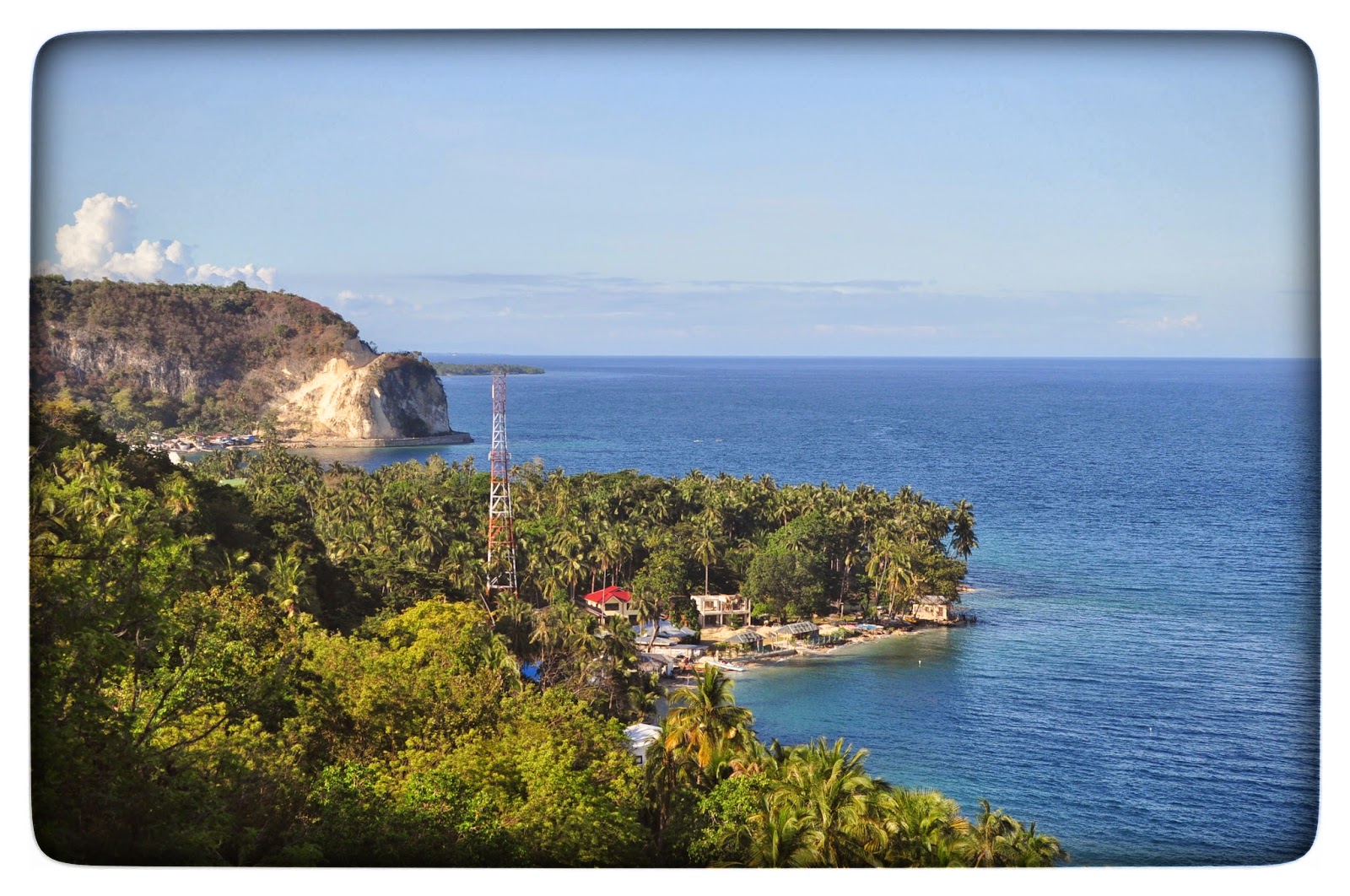 On the way back, Ilihan Rock and the surrounding coasts in Boljoon were pronounced and clear at certain curbs on the way back to lowland. Our driver suggested we stop to take photos just like the foreign tourists usually do. And we did. We also stopped to take a look at the old and ruined watch tower across the highway before going to Boljoon church, eat tempura and drank a plastic of orange juice. Now that was the conclusion I needed. Not the bus ride that followed..

Tip: When you are coming from the south and you need to head out to Cebu City late in the afternoon, do not be too picky and proud. Catch the first bus that stops... be it regular or air-conditioned as long as it has vacant seats. Believe me, standing the whole trip through even on an air-conditioned bus over an approximately 3-hour period is not at all pleasant.