Bright lights, the smell of barbecue, sightings of street artists, traffic, crowds --- my New York welcome. We emerged out of Penn Station subway a little past 10 pm and hastily walked up to the streets to get to the Manhattan Hotel. It was the cheapest you'd find near Times Square. Thanks to GPS and Google maps --- my very dependable allies. 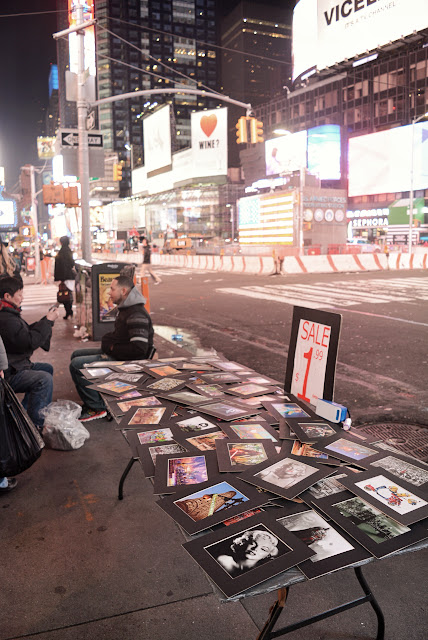 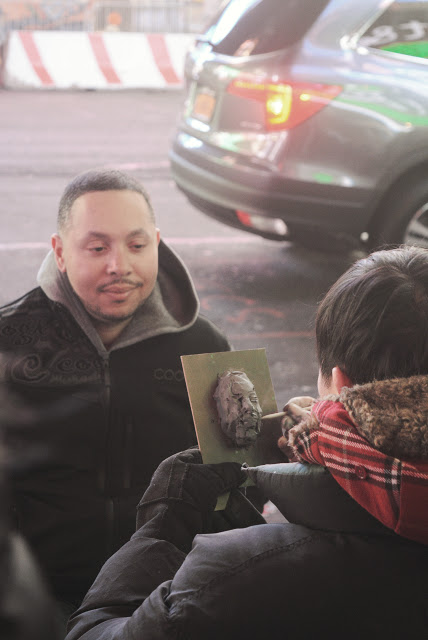 Finally, we were reunited with our friends. Gela was getting ready for bed and John and Jhoana were out in the streets for the evening view of the Empire State building. I and Sheena knew we were running against time. Notwithstanding the cold, we took off with our hand-held cameras for a quick evening walk towards Times Square in long strides.  At one point we stopped to watch an artist create a miniature mold of someone's face. Just next to his spot is another table filled with tiny creative artifacts sold at a couple of dollars each. All those times the smoke of grilled chicken barbecue nearby filled our nostrils. It was very busy everywhere and you can't avoid brushing shoulders with strangers while making your way around the downtown area. Amidst the chaos, the thrill of seeing huge electronic boards screaming ads everywhere was very amusing. The area still looked so alive even that late in the evening. Police kept watchful eyes open for any suspicious happenings around the perimeter. 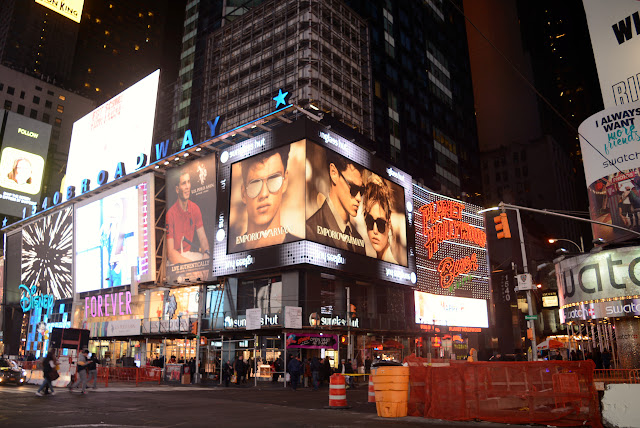 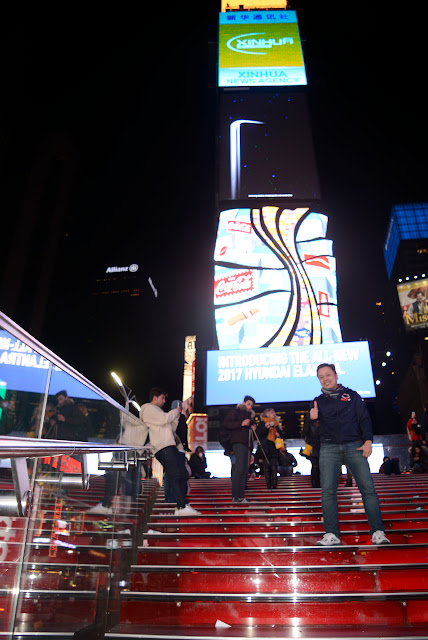 At one time, a tourist approached me and she asked if I could take her a picture using her phone. Not just once but maybe for two awkward moments. I ended up giving her a little tutorial with image adjustments as she was having issues because of blurred, hazy results. She was fighting the fact that all cameras have limitations and are dependent to lighting conditions.

After being in the midst of the crowd and the plethora of noise for too long, I realized how such events easily become another form of escape. Anything that removes you out of the usual is awesome. Noise and hype are not necessarily respites but being in it certainly puts work and other concerns aside, even for a short while. 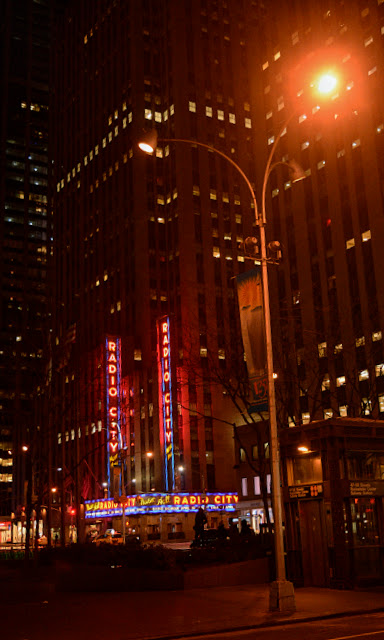 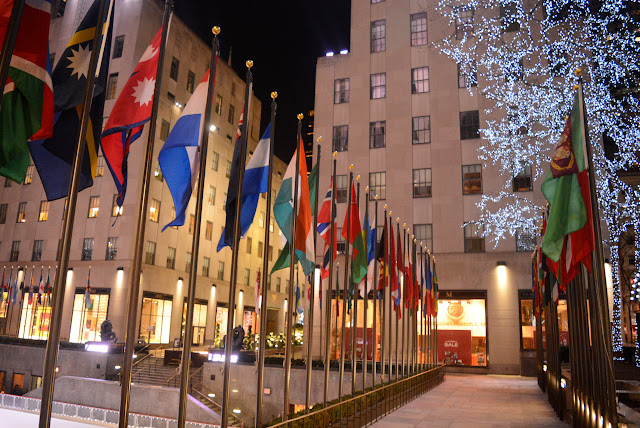 Conscious that there may still be a lot to explore in downtown New York, we kept moving until we reached places like Radio City, NBC, and the Rockefeller Plaza. It was drawing really late that night and our feet were feeling the rigors of the day. Right after stopping at St. Patricks, we started heading home. The smell of marijuana puffed by a passing fellow was easily distinguished by Sheena. I've never smelled one before, hence, it didn't mean something until I was told. It was growing intense and formidable as we got nearer to the person, so when we finally got past him unscathed, we were relieved. Televisions mostly hide the dreadful. That is why, New York is exciting for everyone because we are hearing only about the good stuff. 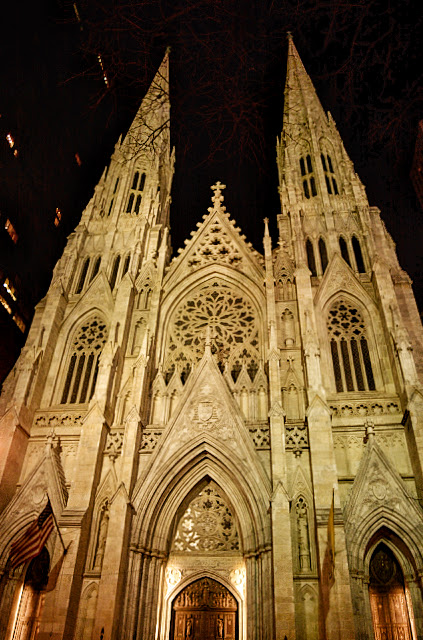 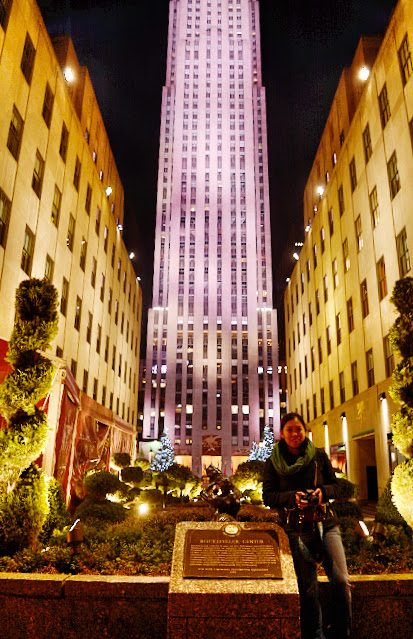 After a taste of  New York pizza, i dozed off thinking of the events taking place the day after.

I woke up early the next day, jogged from my hotel and then around Penn Station, stopped at Pret Manger for blueberry muffin, croissant, and coffee while my friends were getting ready for the trip to Statue of Liberty. 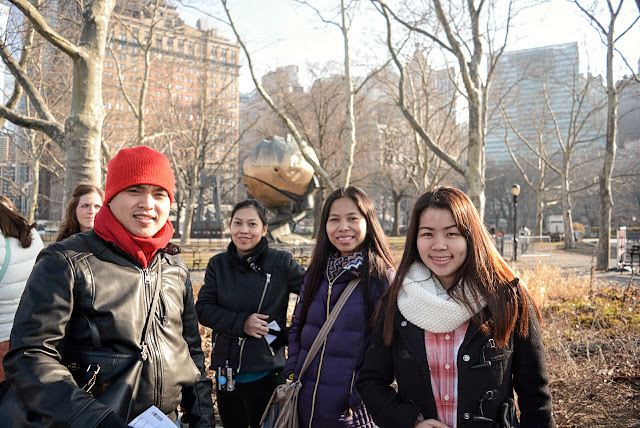 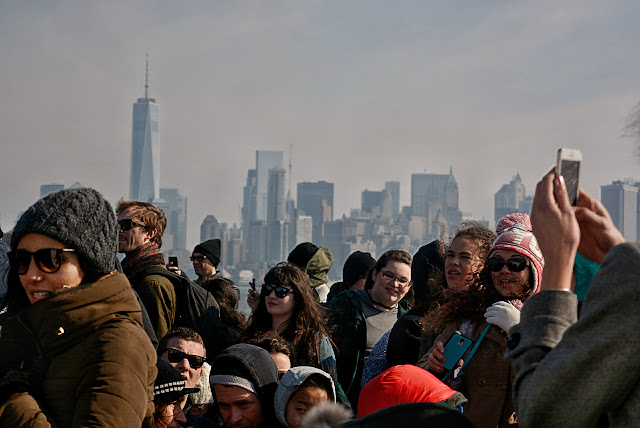 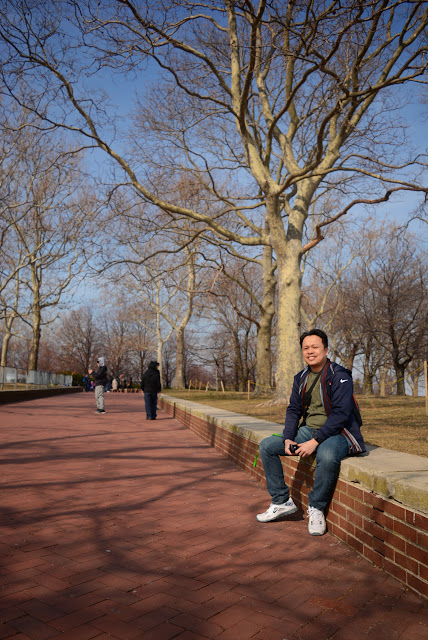 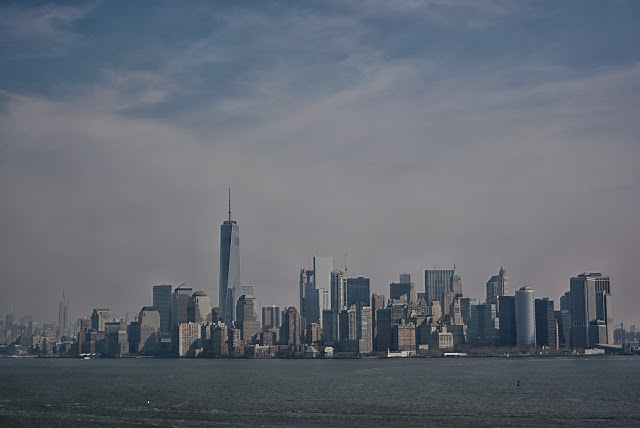 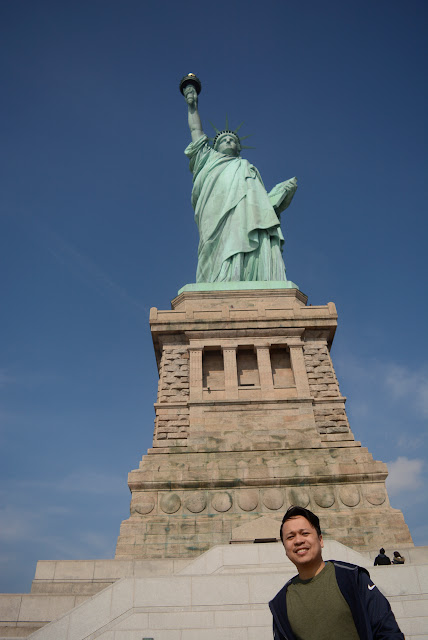 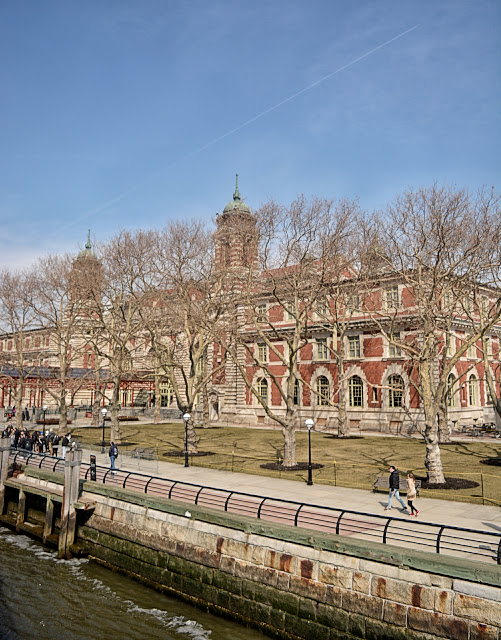 All it took was approximately 30 minutes train ride to Whitehall St and then we walked about 5 minutes to Battery Park. There we trailed behind a line of hopeful tourists excited to finally see Lady Liberty up close and personal. The security was unforgiving as it required us to strip ourselves off anything in our pockets, my belt, bags, and jacket. At the foot of the statue where you enter to climb up to Liberty's inner room was another security check which required my tiny knapsack be left at the locker. It separated me from the flock and I had to find my way in by myself. I was roaming free and taking pictures where I had the chance. The view from the base of the statue was awesome as you see the New York skyline from a distance. We took as much time we had before jumping onto the boat that took us to Ellis Island. The group decided to forego exploration of the island so we can head back to NY for lunch. My friends were excited to eat it at Jollibee's but I was determined to do it in NY's Little Italy. After careful thought, everyone else jumped in to the plan and we made it there just a little past 12 noon for lunch. 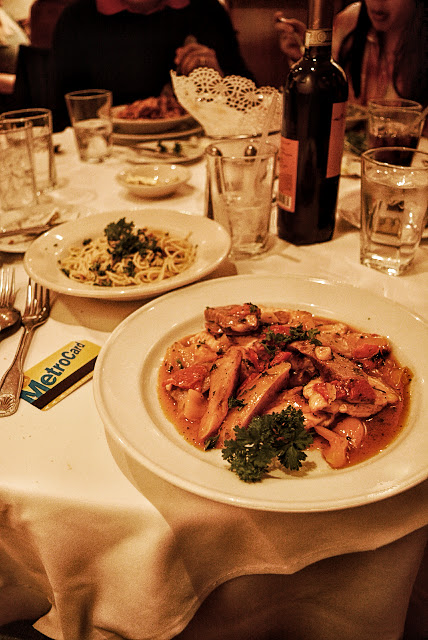 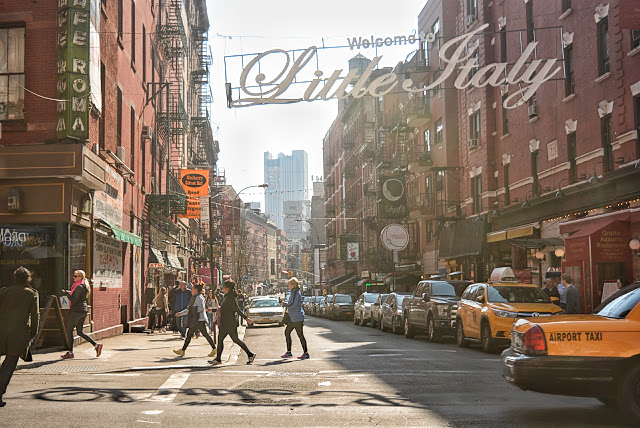 From the restaurant I and Sheena parted from the rest who decided it'd be best to be at the airport early. We, on the other hand, still had Central Park to tour for the rest of the afternoon. Prior to the park, we made a quick stop at Queens to buy Jollibee goods to take back to Chicago. I downed a glass of coke then started our trip to Central Park. 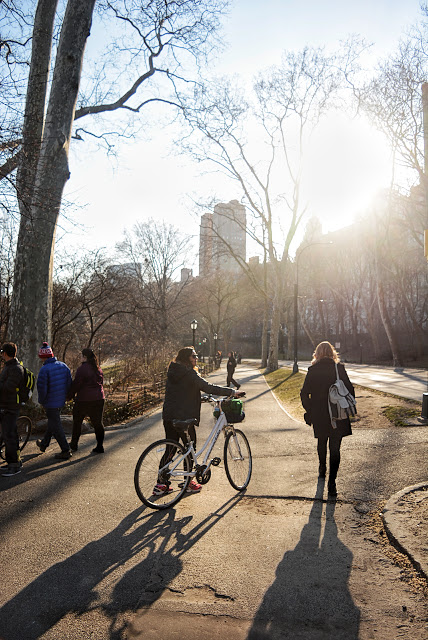 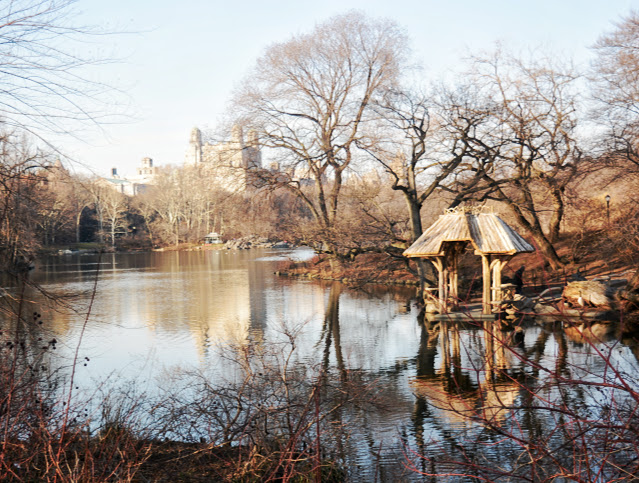 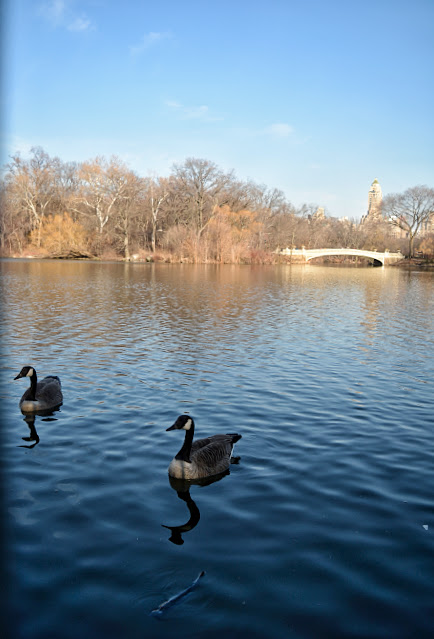 As soon as the train stopped, we walked out of the subway and exited towards the park. It was huge and the only thing making sense was to keep walking, avoiding long stops and take photos where the great sceneries are. Everything from the trees, grasses, ponds, turtles, ducks, people, and design was breathtaking. Of the places we've gone to in NY, I would say the park is easily my favorite. It seemed like the most decent of the places we've been -- clean and well kept. You can do everything in the park -- hide when you need some solitude, bike and jog when you need exercise, go on a picnic with friends, and shout when you feel like you've had enough of troubles for the day. 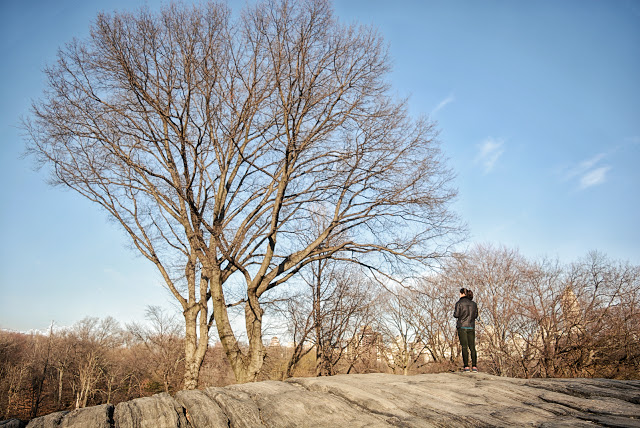 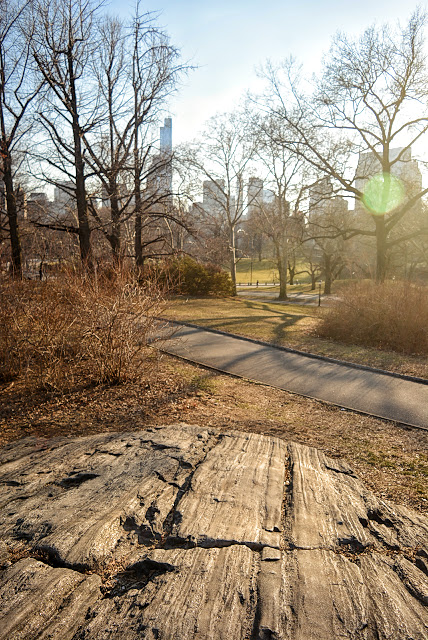 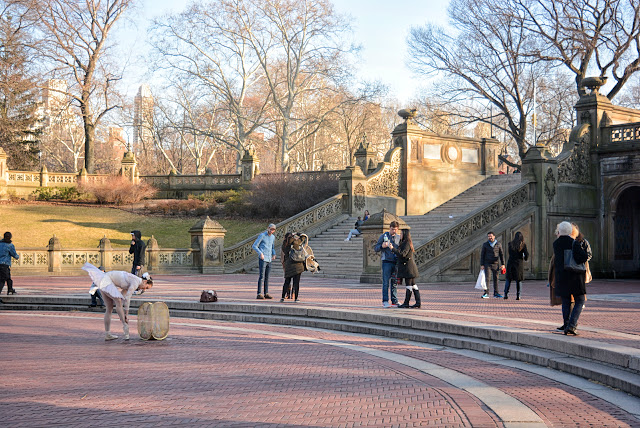 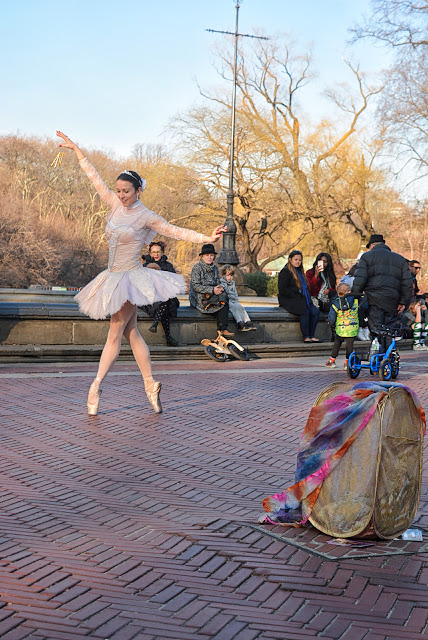 About halfway the park, we were surprised by some unexpected entertainment. At the most inconspicuous corner near the fountain, a ballerina was putting on her ballet shoes. She put her basket at the center and carefully rested her scarf on it then struck an elegant ballet pose. After a few seconds, she gracefully frolicked and pirouetted  on her pointed toes, paused to bend with one leg on the floor and raised the other. There was no music but in the silence you hear a tune play in the ear drawn by the graceful movements she made across the bricked floor. People tossed dollars into her basket, some were transfixed in astonishment. I was enjoying taking pictures but sadly, we didn't have the entire afternoon to watch her spin and sway. We struggled moving away but the park had so much more of just one thing to offer. We hiked an off the beaten path until we found our way out.  A bus drove us back to the hotel where our bags were safely kept for a couple of dollars. After a quick dinner, we slid into a taxi to La Guardia Airport. 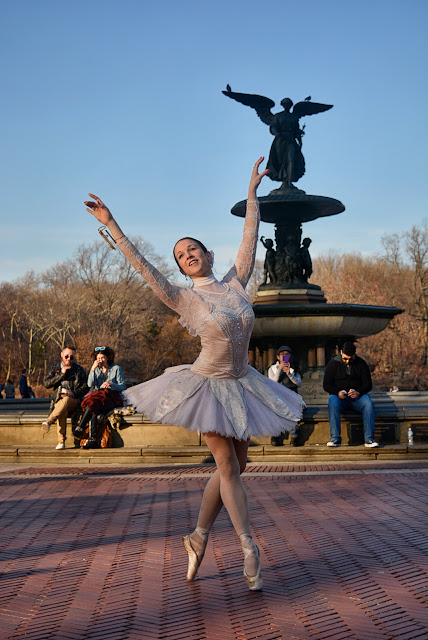 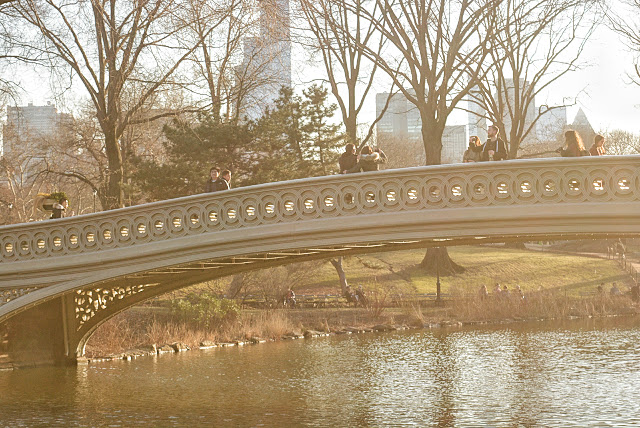 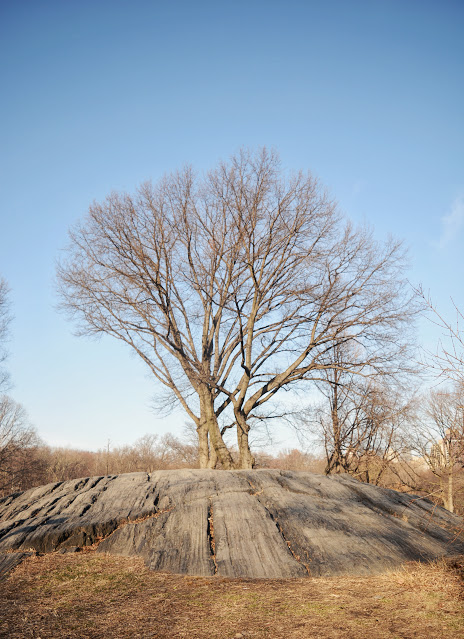 My tri-state trip concludes here. Mishaps can only mean a challenge to overcome. Danger is scary when you let fear overcome faith. Some let downs are blessings in disguise. If you let it cloud your judgment, you end up missing the golden opportunities behind it. Look far, reach out. Explore the unknown or get stuck at the usual. God is good!