Feasting at One Claypot House

It started when I read Mustachio's blog. I was just watching a google image that showed a thumbnail of a very familiar picture I suspected was of Sumaguing cave in Sagada. I clicked it only to be directed to a familiar blogsite. When the header populated, I knew it was Khonie's. Amused to find out that she credited me for having taken the picture she posted in her site, I scanned to her other entries. Alas, I chanced on an interesting mustachio article about One Claypot restaurant. 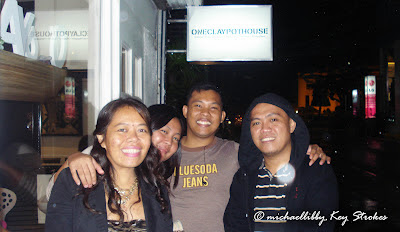 One Claypot is located just a few steps away from one of the newest 7 Eleven branches in Cebu. It's just across the Capitol (NOTE: The shop has since changed to a new location. See address at the bottom of this post.) and along the road at the back of La Fortuna. Its signage isn't that huge, so if you are walking along that road and expecting to see humongous banners of the shop, you will sadly walk past it without seeing any. And if that happens at brisk strides, how much more if one went to locate it using a car or a motorcycle?

At broad daylight, its exterior is just ordinary. The more colorful laundry shop beside it catches even more attention than its plain white painting. At night, however, and talking about it at present, it happens to be the brightest and liveliest spot in that area. In terms of size, it is best described as cute: 2 family-sized tables and a table for two, a small kitchen behind a partially glassed wall, small hanging chandeliers, wall decors, and tiny decoratives lined at the kitchen wall. As if not content with the light from the ceiling, tables are also accented with tiny candles in clear glasses. Given that description, the place can be pop for romantic dining (if it ain't crowded), or appropriate for small group get-togethers where friends are up for light conversations. It is not a good place to be loud and noisy especially when other diners are eating at nearby tables. A loud laughter easily reverberates inside.

There are at least two waitresses who are alert at taking orders. For dinner, we took the interstingly-named specialty of the house,  Lah-lah-lah Claypot (Large), Matsya, and a platter of Chicken Wings. 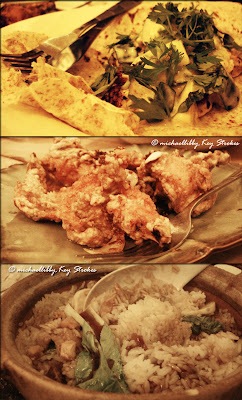 Lah-lah-Lah Claypot is said to be of Cantonese heritage. They say that cooking using this method requires more time than when using metal wares. Rice is put inside the claypot with sufficient amount of water before it is heated. When about 70% cooked, the rest of the ingredients are added until all the flavor coming from the mix blends and spreads. It is a preferred style of cooking for most that are familiar with it because the moisture is retained inside the pot while steam circulates the smell and flavor of the different ingredients until it unites making that distinct taste. In this version, I and my friends enjoyed the taste of rice rich with sweet, spicy syrup, flavored pork cutlets, and slices of hard-boiled egg and chorizo bilbao. The latter turns out to be the most prevailing ingredient of the dish both in scent and taste. As if to add contrast to the color of the dish, a leaf or two of a vegetable were added.

Matsya is a pita bread dish that comes with a slice of parrot fish mixed with yoghurt, chunks of fresh cucumber and  cilantro/coriander (wansoy) toppings. The dominant flavor in this dish is "wansoy". Its tang or mint is hot in the taste bud which immediately became my friend's disappointment. I on the other hand, find its degree of saltiness a "pull back". I think the salt came from both the bread and sour yoghurt mixture. For vegetarians, this could be a typical pick at quick scan on the menu.

The last dish we ordered was a platter of chicken wings. Chicken was cooked appropriately, not dry, nor undercooked. Although the menu did not spell the secret ingredient that made its coating unique, we suspect that it was usual batter with shrimp paste for an additive. It is not crispy fried chicken but tender and juicy.

Since the food in the pot left us beaming we decided to maximize gratification by ordering an additional medium pot. We ate until we were full and stuffed. The entire meal for us 4 cost a total of P1,210 inclusive of the 10% service charge and 2 canned sodas.

Our average rating based on dishes tasted and our actual experience resulted to the following: 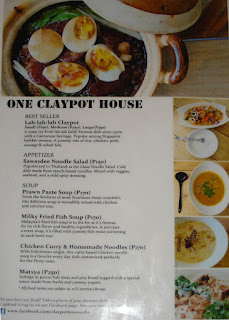 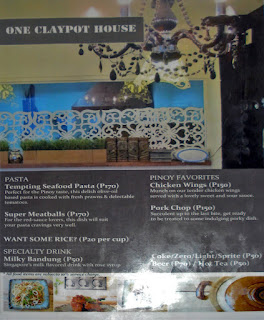