From the top of Mt. Samat, we headed back down to Diwa Hi-way through the same trike that took us on the way up. During the descent, we were engaged by the tricycle driver to a conversation with the obvious intent to convince us to hire his cab for the drive back to Bagac at P900. It got us a little confused at first but we eventually decided not to take his offer and will try to wait for a passing jeepney or bus at the highway instead. We paid him P75, crossed the street, and true as hoped, a jeepney stopped, not even 15 minutes since we started waiting. Off we went back to Bagac terminal. From the terminal, we messaged Kuya Willie to take us to their eatery for lunch.We ate as if we skipped 2 meals that day:

I especially like Ate Marivic's "chicken escabeche" because from where I came, escabeche is a fish recipe. After eating, we hurried to make it in time for the next tour schedule in Las Casas Filipinas de Acuzar which was at 3PM. Once again, Kuya Willie and his wife, our unexpected hosts, were very kind to get us all set for Las Casas. We were taken to meet a quiet and decent kid whose name escaped my memory (my bad .. tsk) and with whom we were chaperoned to the site.

As soon as we arrived, we registered and entered through the huge bricked arc entrance. Before our very eyes stood beautiful Spanish houses laid out like they do in most villas and subdivisions. The 400-hectare area includes a rice field that extends to the mountain, Umagol River, a pool and many more. 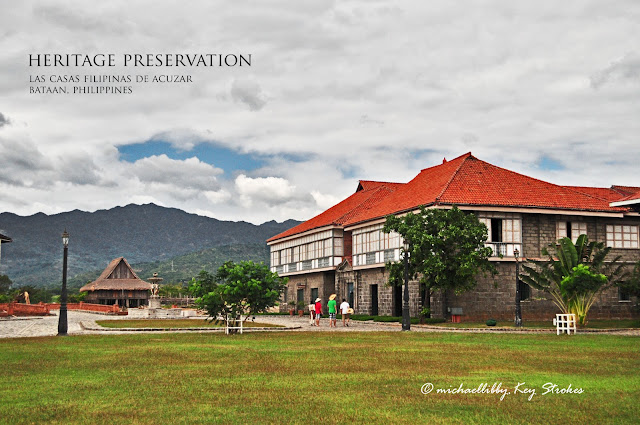 We were just in time for the tour so we squeezed ourselves in the crowd of tourists to listen to the pretty guide in Filipiniana dress. She took us from one house to another while giving glimpses of every house's history. The stories behind each house were interesting especially that she details the beginnings until how the houses were turned over to the Acuzars. One story caught everyone's attention about one of the houses, Casa Unisan, formerly owned by a surviving member of the prominent Maxino family in Quezon during the Japanese occupation. It was said that the youngest child was the lone survivor when the family massacre happened in the hands of Japanese tulisan. The yaya's decision to keep the child hidden inconspicuously saved the boy's life. Today, the lower ground of the said house was converted into a restaurant.


While house hopping, i noticed that the backyard of one of the houses had what looked like a poultry.
Fat feathery roosters freely roamed the place making it feel like as if you have visited a home in a not very expensive province. It kind of make you forget that day tour costs P600 pesos (prices may have changed). When the tour ended, we maximized what little time we had left to take pictures of the houses without the distraction of loitering tourists. We roamed amazed at the different carvings and sculptures scattered around the vicinity. Of course, we took time to pose for a picture with the sole mode of transportation in the location -- kalesa.

We bore the heat of the day and took our time to enjoy the place. Our last stop was at the famed pool which is open for swimming even for day trippers. When it was already 4PM, we were taken to the terminal by Kuya Willie for our bus ride to Balanga, then to Cabcaben in Marivelles where we leave for our trip to Corregidor, the day after.

The activities we did that day is best described as historical. It was so enlightening and stoking to be transported through time and feel the way our Filipino soldiers felt during the war and at the same day walk along the streets adorned with beautiful Spanish houses which tell a lot about why we are who we are. It's like finding missing pieces of the puzzle and every piece brings an answer to the questions we held on for so long. Travels certainly widen our perspective and understanding.

Here's my breakdown of expenditures on the second half of day 4.

Backtrack:
Befriending Bataan
The Splendor of the Shrine of Valor