From Baler Series: The Rolling Stores

When traveling takes you to places you never imagined going and makes you do extraordinary things -- that's "memorable".

After breakfast at Baler's rolling stores, our trike ride took us to sitios Castillo, Cemento, and then to Diguisit stopping at the foot of the hill leading to the PAGASA Radar Station. There we started the ascent towards the picturesque Dicasalarin Cove. Ascents are always tougher than descents so we persistently lifted our tired limbs, intentionally looked around the greens for encouragement, noticed even the most insignificant signs, sights and sounds to break boredom, occasionally laughed and shouted to crack utter silence (thanks to the joining sound of occasional chirping birds and windblown tree trunks and leaves). The higher the altitude, the more frequent we found ourselves catching our breath and taking short stops to adjust to the increasing air pressure. After about an hour climb, we finally reached PAGASA.

We entered PAGASA for a quick visit, saw their weather tracking system from outside the tinted glass walls of their control room, and sighted the big white doppler radar sitting on top of the building. On-going maintenance restrained us from climbing to the rooftop and so we settled to round the vicinity for an unrestricted view of the mountains and the wide ocean leading to the horizon. We were literally standing on a cliff nauseated by the sights several stories below our standpoint. When dizziness started creeping in, we headed our way around the building to see the solar panels tilted for optimum reception of sunlight.


A few more steps back our track is a left cut marked by a keeper's station where we were asked to register for a trek down to the Dicasalarin Cove. At that spot, in fact, we can already take good pictures of the entire cove. Just because of the obsession of a friend, which I kind of shared eventually, we single-mindedly headed towards the cove to discover what that unpopular white figurine looks like sitting very discreetly at the tip of the cove. What we thought was an easy 20-minute descent turned out to be almost a tiring hour walk under the midday sun. It looked near because the cove was in sight. We missed the curbs and turns in our calculation consequentially sacrificing our female companion whose tolerance to this difficulty we may have unintentionally discounted in the process.

Finally -- the cove.
Much like the description of a good source from the internet, we had to walk through a forest of tall trees to reach the grandeur of the beach front. White sands stretched to a smile and dimpled with a rocky hill at the end. I knew that our ultimate goal was the thrill of a "eureka" moment to finally behold that white obelisk-like structure which form by now looked more pronounced. After several refreshing gulps of water from their fountain (sourced from an uphill river exiting to the beach), we walked our way to the tip of the cove and climbed a total of approximately 200 steps up the rocky hill to see the work-of-art unfolding before us. It was after all, a strangely designed, lighthouse ---- and nothing else. We took shade in the opening of the tower base. Our female companion sought solace by taking a short nap while the cold sea breeze fanned her to sleep. My other friend's consolation was taking pictures. I climbed up the lighthouse to model a few shots. :) 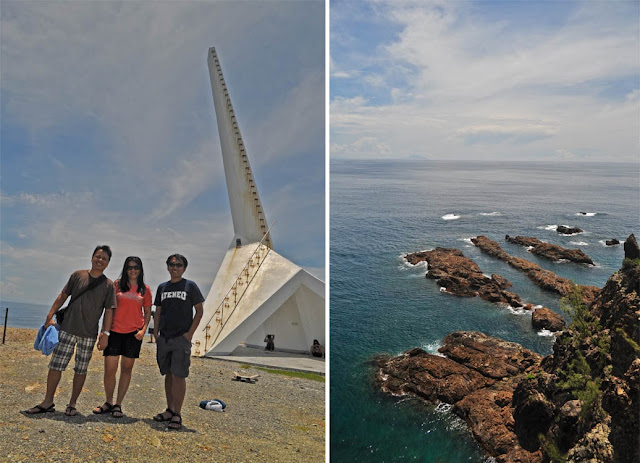 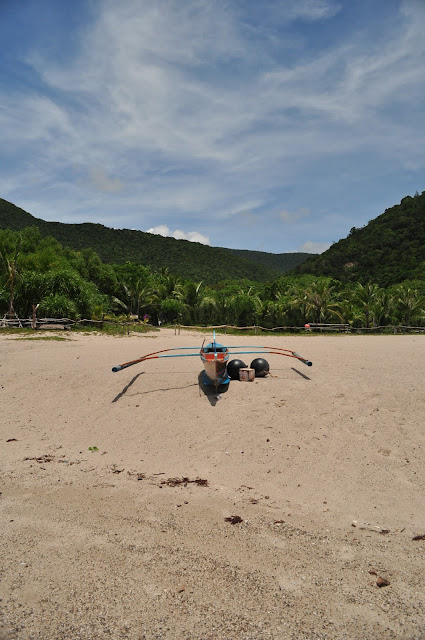 The ordeal, the misadventures, the simple things made extraordinary by experience, memorable as they were bring so much joy now that I think back. But wait....that's how I wanted to keep it mind. I am still trying to forget that we had to redo the climb and walk under the scorching sun up through the turns, the curbs, and yet to another descent to go back to where the walking started. Let my friend's blisters on her sole take you further into details.. ;) Enjoy!!!