Of the 3 days we stayed in Baler, I'd say the second was the most packed with the greatest adventures.

We rose at around 7am for a breakfast meal at Bays View Inn. I have been talking a lot about pancakes at Bay's Inn the night before because  I knew our female companion was into it. I was glad I kind of sold them the idea of ordering it banking only on a few beautiful photos I have seen in the internet. I wish I wasn't very reliant on visuals and read the details of the blog instead. I would have spared my self and my friends the obligation to finish the pancakes that morning.

Nevertheless, we shrugged the negatives and took on the positives for the activities which were to come. Armed only with anticipation and a shooting lens, we headed off for Dimatubo Falls.


From Sabang, it will take you to Brgy. Ditumabo via poblacion San Luis about 2 hours on a trike. The moment the drive leaves the highway, it is important to get yourself ready for the undeveloped road going to the waterfalls. There were times we volunteered to get off the tricycle and began walking for several meters forward especially when big rocks scattered on the roadway. Our weight was too much to keep the side car at considerable distance from the protruding rocks on the ground. It was a better option to walk rather than risking the tricycle for a permanent damage.


Walking allowed us to look around and appreciate the view. There were times you pass by small native houses that are several meters away from each other, local people and children, trees, strange greenery, and even other tourists walking opposite us along the way.

As soon as we arrived at the small community on both sides of a river connecting to the waterfalls, we parked the trike and started our journey on foot to the water source. A few minutes of walking will take you to a small cottage where a donation of any amount is collected before you are allowed continued passage.

Sounds and sights of the flowing river plus the huge water pipe should be sufficient guide for tourists until it takes you to a small waterfall at the side, and a few steps onwards, a water dam, then the Mother Falls (Dimatubo Falls). The temperature is very low and neither a jacket nor a blanket will suit you, therefore, embracing the cold is the only option. Locals and tourists alike have already started enjoying the clear water when we arrived. It would have been utterly disappointing if we skipped swimming.

Freshwater crustaceans caught our attention, too. 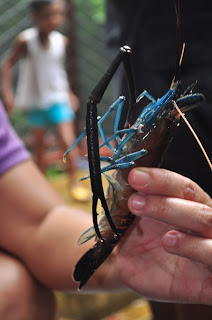 From the waterfalls, Kuya Bernard drove us back to Maria Aurora to see firsthand the said biggest Balete Tree in Asia. As soon as we arrived at the Balete park, I noticed the crowd at the registration table. I looked beyond the perimeter fence and saw huge tree roots and looked up to understand the enormity of the 600-year old tree. I gasped at the sight and run thoughts of how enchanted it must be. On a second thought, how can it be scary when several tourists were all around the roots of the tree. Some hang around while others braved to see what the cave inside the surrounding roots looked like. We did the same as soon as we registered and while my friends took the observer's stance I headed for the treetop. If Edsa traffic is bad in Manila, it was worse on the way to the treetop. Curious, inexperienced female climbers took every precaution and followed the guide's every instruction. It was already way past our lunch and I had no intention of tarrying along. I looked around and worked my own route to the treetop. Moving and hopping from one root to another, I managed to get to the top quite fast (bragging aside) overtaking a number of tourists.


After a few pictures, I trailed down to the bottom through the outer roots and then, we exploited the roots background for more choreographed snapshots. It was an amazing experience and quite fulfilling knowing that my limbs can actually still support a tree climb even after 2 decades have passed. I used to climb papaya, short coconut trees, guava, acacia, now.. balete (Philippine Banyan tree). My reward to self? -- "turon" sold nearby.

I have to confess that weeks before this trip, I have already felt butterflies in my stomach in anticipation for this activity. I know friends would say, "you have never been to Baler if you didn't surf". It was also an item in my bucket list that I wanted to check. So, after a quick stop and shop at Baler town, we bid farewell to our kind and accommodating tricycle driver after completing the other half of the P1000 commitment we agreed for a day and a half tour around Baler and Dimatubo. At an extra expense, we commuted our way to the Rolling Store to eat our lunch (at 3pm).

Then it was time I surfed. We hopped into another paid trike (Php12 - Php15 a person per destination) to Bay's View Inn at Sabang, Beach. It was Sunday and the crowd of tourists was noticeably thinning. A couple of meters away from the foot of the resort's stairs, a surfing training school was still operating. I started entertaining hesitations and madly persuaded my friends to surf with me only to fail in each attempt. I almost said, "No", too, but braved myself to say "Yes" instead (eyes closed in theory). At Php350, I was already hooked for an hour of surfing lessons, a surfing board and a trainer.

I was lectured and demonstrated the steps to learn surfing by a 12-year old trainer. And when he decided that I have learned enough to hit the waves, he asked me to carry the surf board, lie on it, and I began paddling to deeper waters. In my conversation with the trainer, I have learned that he had won the 7th Aurora Surfing Challenge held this year (February 7-10, 2013) in the Grommets Division (14 years old and below). He said he works for the surfing school during weekends and holidays to help his family bring money into their home. He gets funding for his studies also from the prizes he won in the competitions. I knew I was in good hands and felt fortunate to be trained by the best in Baler. I have got to be able to stand up on the board or I'll embarrass myself under the coaching of a pro several years younger than I am.

While waiting for the first wave, I have rehearsed the instructions in my mind and sought comfort from the leash tied around my ankle. When it happened, I felt a nudge from the tail as if pushing my resting legs upward and at the count of 3 I stood up just in time to stand on the surfing board already atop the wave. It was a short-lived 2 to 3 seconds of happiness and then I fell midway to the shoreline after anxiety and fear caught up. I nailed my thoughts on the 3 seconds glory and smiled despite shaking feet. I said, "let the waves come!", my shout louder than my courage. I knew I won't be able to complete a ride unless I self-motivate. I paddled my way back to my trainer and he asked, "what happened?". I said, "I got scared." which he responded with "Okay, give it another shot". True as he had said it, I gave it my second, third, and many shots more until the training hour was over. I was tired but extremely glad I survived it with several successful drifts than falls. I tipped my trainer a hundred and walked back to the resort head held up and a smile stretching from ear to ear while my mind went crazy doing the Harlem Shake.

Watch a video of the 7th Aurora Surfing Challenge highlights here and here. :)