The arduous journey to Mt. Pinatubo begins at dawn. I and my friends decided to rest early the prior night so we could wake up as early as 3am for our Pinatubo trek. Months before this day, the preparation has already started. Some of the tasks we covered early on were:

1.) Purchase a coupon for the 4x4 ride to and from Mt. Pinatubo.
2.  Deposit the payment of P400 in the Travel&Save Tours' BPI account for the Department of Tourism (DOT) fee.
3. Claim voucher through their website and register to schedule the desired date of visit.


For this trip, we thought we were lucky to have purchased through Beeconomics a tour sponsored by Travel&Save Tours which bore the following inclusions:
The voucher price was P1,998 for 2 persons and was marketed as discounted from the original price of P7000.*

Waking up at 3am was mandatory for us. The military conducts exercises everyday and they do it right at the area where we pass towards the crater. We were told that all 4x4 rides should have already secured the pass at 6:30 am. Otherwise, the visit will be postponed the day after since they can no longer allow passage while the military activities are on-going. Whether this is true or not, we obliged.

From McDonalds we took a jeepney for Dau Bus Terminal, then a bus to McDonalds at Capas, Tarlac.

While at McDonalds and waiting for the 4x4 off-road vehicle driver, we ordered our breakfast since it turned out that the said inclusion was only available during weekends. I have learned about this only after taking the initiative to contact the agency's staff by phone that morning. Upon the arrival of the expected driver and his wife, we were also informed that the coupon didn't cover the drive from McDonalds to the jump-off location at Sta. Juliana. She said if we opt to ride through the 4x4 we just have to add P500 for the fuel charge which is to take us from Capas to Sta. Juliana and back. We have had enough of the surprises and thought that an additional P100 for each of us (5 pax) shouldn't be too much, so we agreed. We also learned that they actually accommodate direct negotiation from tourists so we didn't have to channel payments through a travel agency, hence, paying a rather lower price at P800 per person for a group of five. That was quite interesting especially that it equals a savings of P199 per person on use of 4x4 alone. Before leaving McDonalds, we thought it was important to take out food for our lunch. There are no canteens at the crater or anywhere near that vicinity. A packed lunch was necessary. 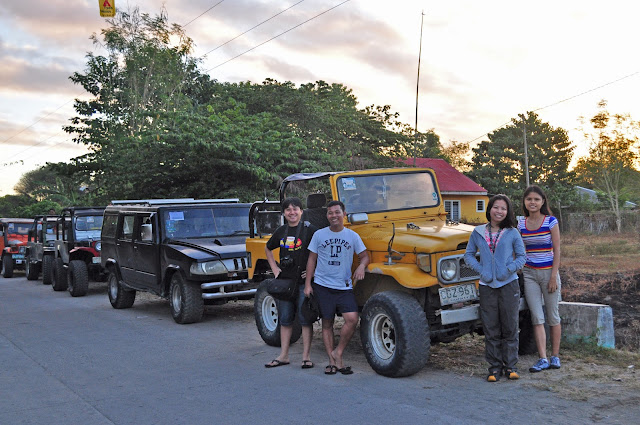 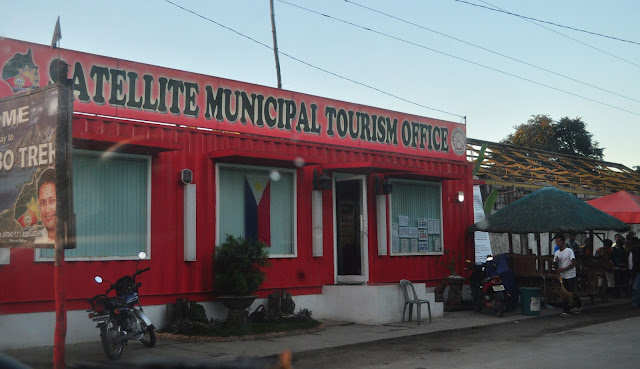 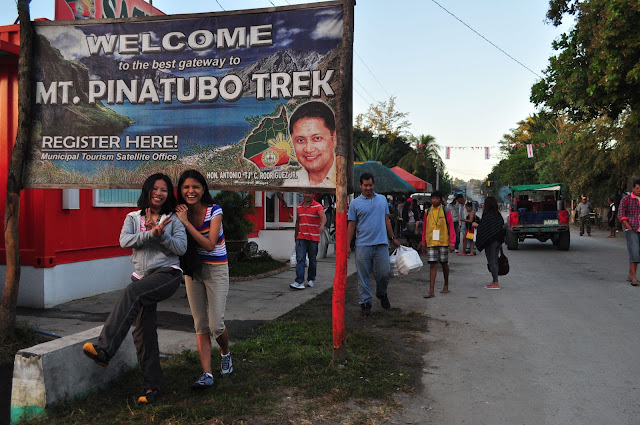 On we went for the jump-off. It was a very enjoyable 35-minute drive seeing the sky alight at sunrise giving golden glow to the hills and mountains before us. At Sta. Juliana, a line of colorful 4x4 vehicles parked near the DOT office. The drivers were busy getting for themselves a copy of the form we all had to fill-out to waive the DOT office any liability for possible injuries should there be any incurred during the travel. After signing the form, we beamed with excitement as we entered the wide terrain of light grey lahar desert formed as an aftermath of the Mt. Pinatubo explosion in the year 1991. While traversing the valley we noticed sheds several meters away. The vehicle was halted right were these sheds are and I was overwhelmed with surprise and genuine gladness to see our native Aetas face to face. It was like putting actual figures to illustrations I only saw through my textbook pages way back in high school. While the rest of the tourists watched from a distance and took pictures of the aetas, I was ready for immersion into what felt like bloodline affinity if there was any. Putting my arms over the shoulder of the little children, I felt proud being taken a picture of them with me (did they feel the same? I don't know.). I knew they were one of Philippines' treasured tribes since they hold the closest identity of the pioneer dwellers in some islets of the Philippines before the Spanish colonization. 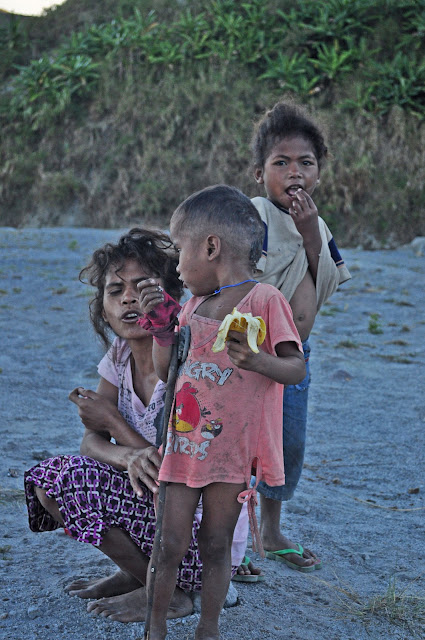 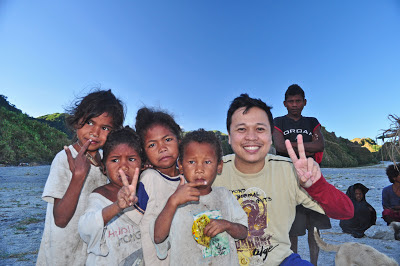 It was fun seeing them selling their banana, sweet potatoes, and ginger produce to the tourists. Sensing that I wasn't buying, they asked if I could send them copies of the pictures I took with them instead, to which I immediately agreed. They were enjoying the camera time so much that they blurted "padalhan nyo na lang po kami ng kopya.. at kung gusto nyo, lakipan nyo ng Payless". We responded with sympathy and amusement, "Ate, Lucky Me na po uso ngayon.".** We bid farewell while our hearts lingered with love for our native Filipinos. 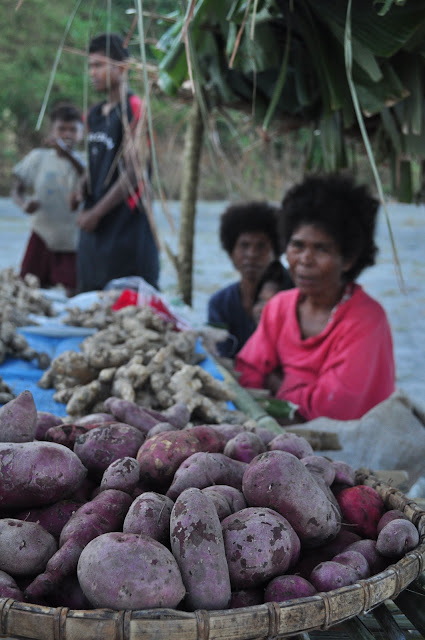 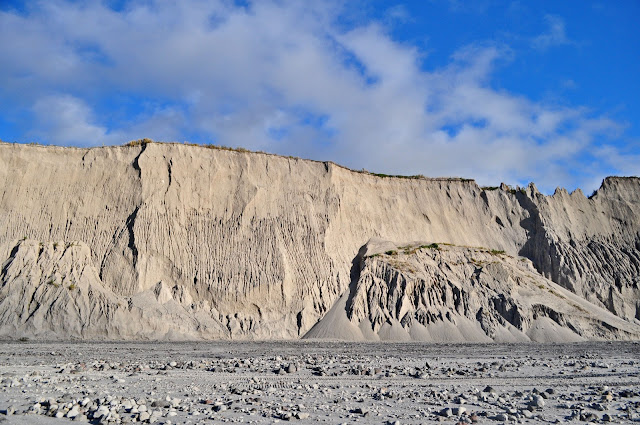 We continued our 4x4 ride for almost 2 hours passing through small rivers, rocky slopes, humongous lahar walls which were there for quite sometime already showing growth of small trees and bushes. It was a beautiful ride feeling so much of the natural resources, scorching sun neutralized by cold breeze of mountain wind, the greens, the yellows from sulfur deposits in rocks where water pass through, huge boulders piled one over the other. In some places at random intervals, I noticed stones stacked one over the other artistically casting nice shadows on a sunny morning. When I asked the driver, I was told that they were created by Aeta children as their means of play in this very remote and lonely place. While these towering stone arrangements impressed me, I also could not help but gaze at the clear blue sky filling the horizon and ending where the light brown lahar mountains rise. It was so amazing that each time I chanced on good opportunities, I snapped pictures, smiling, and not minding the times my Nikon bumped and bounced on the 4x4 window frame. 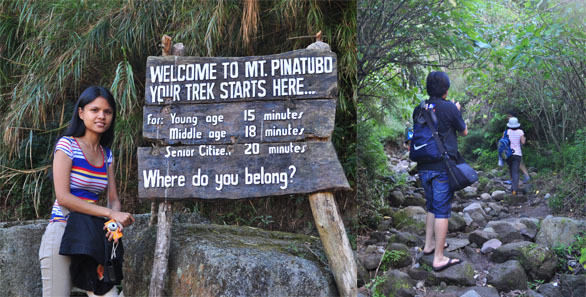 Finally, we reached the start of what was said to be a 30 minute trek to the crater. There were a few times we inevitably had to wet our footwears. Thanks to internet, I managed to ready myself through a blogger's recommendation to wear open and strapped slippers for the trek. 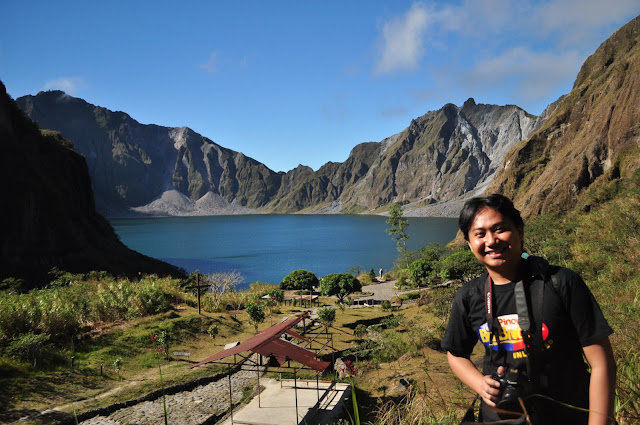 As soon as we arrived at the opening where the crater is already in sight, we climbed uphill to get a good picture of the entirety of the crater view. To reach the actual mouth of the volcano, we had to walk down the several man-made steps. It was surprising how one can forget it once erupted. It seemed at the sandy area like a seashore but the stillness of the water identifies it as lake formed after rain has filled the hole several years after that historic event. It is said to remain active -- only asleep. 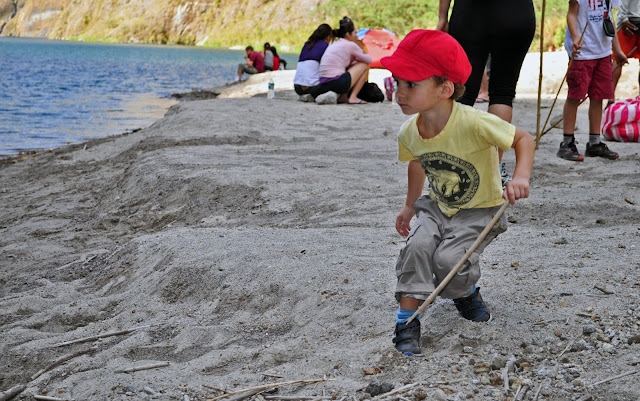 After taking our lunch we took time enjoying the place watching also other people and tourists have fun in the vicinity. The water was very tempting but I restrained myself from swimming due to clear instructions from the guide and the recent news about a tourist collapsing after soaking his feet on the water for some time. It must have been fatigue, they say, because he only waded and died that instant. I waded too and washed my hands very quickly just to feel the water and stood up fulfilled of the experience.

I am happy I survived Mt. Pinatubo. The water at that hour was already emerald green. I think sunlight was definitely responsible of the the water's changing color. 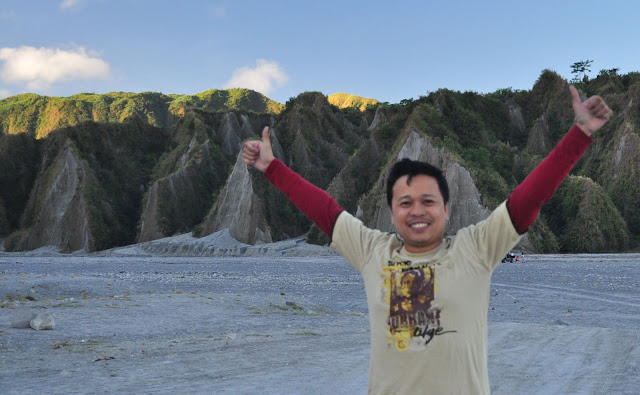 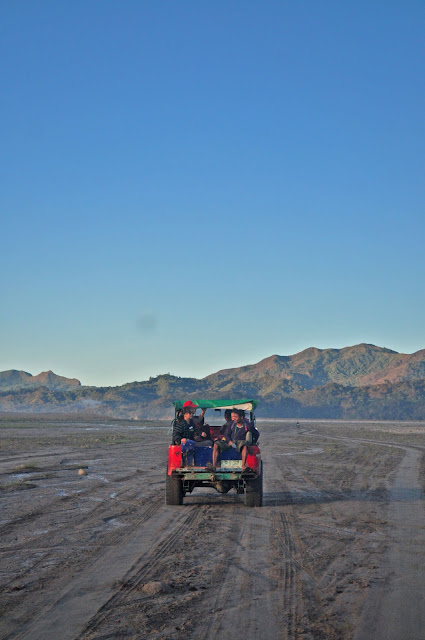 Sadly the moment came for us to leave. The guides have been receiving communications from the military that they should already start evacuating the tourists from the crater and start heading back to the jump-off before nighttime catches on us. On our way back, we were all exhausted that it was so easy to doze off in the vehicle while the driver carefully stirred the wheels. Not wanting to end the journey without taking a picture of the wide lahar landscape, I asked the driver to stop, which he did. He then took us back to Sta. Juliana, dropped off the local guide we tipped P200 for carrying some of our luggage and for keeping us safe during the entire trek, and then drove us back to Tarlac. We took a jeepney back to Dau and then another jeepney back to Fields Avenue near Gani Hotel in Angeles City.

The entire trip was definitely energy draining but indeed a worthwhile experience. The crater view lingers to this very day.

-----------------------------------
*Note: I and another friend have personally experienced difficulty communicating with the aforementioned agency. It was always us who had to initiate the contact and when we do, our text messages sometimes get no replies. However, patience and persistence do get results, so bear the stress and enjoy the process.
** One of my regrets is not anticipating meetup with the Aetas. Had I known, I would have definitely brought with me Payless noodles. Make your trip to Pinatubo meaningful by bringing some goods you can give to the Aetas who oftentimes only had to live from their daily produce (sweet potatoes, etc.) to get by day after day.