We were walking according to instructions from the owner of Gani hotel to find the street where we could get a ride to IKABUD, a popular Filipino restaurant in Angeles, Pampanga. Just a few stores along the Main Gate Friendship Terminal and in front of Mr. JJ supermarket, we noticed a well-lit store bearing "Korean Bakery" for a signage. It was quite interesting since it stood lined along small conventional Filipino stores which were just walls apart. Since, we were hungry for a sumptuous dinner at that time, I put my curiosity behind. As soon as we finished dinner, we really had not much choice but to go back to where we came from to avoid getting lost in the city. When the jeepney halted at the crossing near Mr. JJ, my thoughts wandered and my curiosity began to rise again. When I learned that my companions wanted to go back to the bakery which to me brought both emotions of relief and surprise, I strut silently behind them grinning. 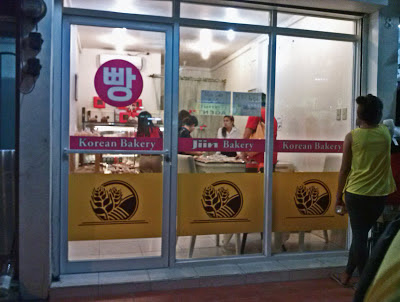 I have been to Korean restaurants before but I had yet to see what their bakery looks like. When we entered, it was just a glass-walled store lit under fluorescent lighting, a long cake stand in front, and some bread and cookies display on the sides. It was simple but not the cakes. You could set apart a Filipino, American, or European cakes from the Korean creations. Theirs were particularly adorned with fresh slices of colorful fruits. While our bakers put solidified fondant strawberries theirs had the actual version. While our cakes are flavored mainly with delectable chocolates (be it white, black, or brown) theirs had green tea, berries, and other healthier options. My companions got so drawn to it that they decided to buy one out for an evening dessert. They picked the Green Tea cake with fresh Kiwi, orange, and cherry toppings. 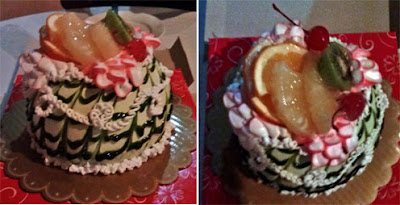 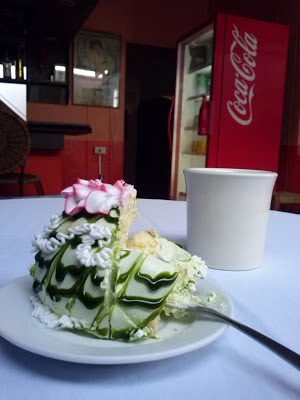 Although uncertain if all Korean cakes are prepared with the same level of sweetness, the green tea cake did taste appropriately sweet. That appropriate sweetness is by the way quite a contrast to our usual cakes that bear heavy sugar ingredient suited for the sweet-toothed customers. We seldom fail luring customers with excessive sugars because chocolates and candies were after all supposedly sweet but the deviant and healthier Korean cakes won me over the former. It may take time for Filipino taste buds to acquire this sugar-less taste on Korean cakes but baking cakes this way definitely makes it the healthier option. Now, we can eat more slices than the usual, guiltlessly.